Mercury as imaged from the MESSENGER spacecraft in January 2008.  2.8 km/pixel resolution at the equator.
This week's blog entry continues looking at the science the Europa Jupiter Science Mission (EJSM), which could consist of at least NASA's Jupiter Europa Orbiter and possibly ESA's Jupiter Ganymede Orbiter. (See this blog entry for the introduction to this series.)  Both missions still face a selection hurdle.  JEO must be prioritized by the Decadal Survey and JGO must win out in a selection against two astronomy missions.

Prior to entering orbit around their namesake moons, both craft would perform a number of flybys of the Galilean moons.  Messenger's flybys of Mercury and Cassini's flybys of Saturn's moons have shown what modern spacecraft with modern instruments can do from quick encounters.

JEO and JGO would bring three key assets to a tour of the Galilean moons:


Perhaps the single greatest accomplishment these craft could perform would be to extend our high resolution coverage of these moons.  This map shows the resolution of the current coverage for Ganymede following the Voyager and Galileo missions:

The next map shows the resolution of coverage that would be possible from the current, nominal JEO mission, which may well be improved as mission design progresses:

The strips of high resolution coverage would be the ground tracks beneath JEO as it makes its closest approach.  The JEO instruments would be designed to capture data as the craft orbits Europa, and this ability to acquire data rapidly apparently would be employed to provide very high resolution images beneath the ground tracks during flybys.  The cameras would also be able to acquire images at greater ranges (and lower resolutions), much as the Cassini cameras have for Saturn's moons.  Certain instruments, such as the laser altimeter and ice penetrating radar, however, would operate only during closest approach.

The following chart shows the coverage the nominal JEO mission would provide for each moon from the flybys.  IPR is the ice penetrating radar and LA is the laser altimeter.

Of the two craft, JEO would have the more capable instruments (part of what the ~$3B JEO price buys compared to the ~$1.2B JGO price).  The following two maps show image coverage of Callisto following JEO's nine and JGO's fifteen flybys of Callisto: 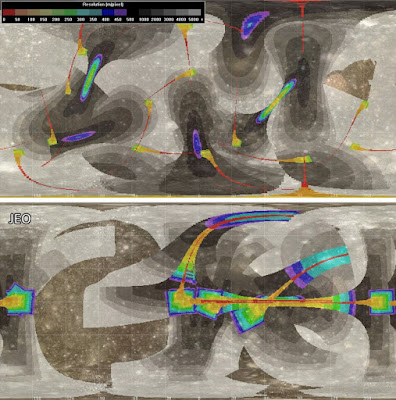 The flyby science campaign would provide incredible advances in our understanding of these moons.  However, it is important to place the return in perspective.  The orbital geometry of the missions mean that the high resolution coverage occurs over only a single hemisphere for each moon.  It is my understanding that with time, the orbital geometries could be changed to view the opposite hemisphere and the science analysis group as asked if this could be reasonably done.  I expect that it is a tradeoff between more science from flybys versus the risk of the craft not surviving for their prime missions in orbit about their respective moons.

Multiple flybys also aren't a substitute for studies from orbit to understand the processes that have formed moons.  An orbiter can image the entire surface in high resolution and selected portions in very high resolution.  Certain instruments crucial to understanding the structure of the surface and interior such as the laser altimeter, ice penetrating radar would gain relatively little from flybys (see how limited the ground tracks would be in the chart above), but could provide global coverage from orbit.  Should NASA and ESA decide not to fund Galilean satellite orbiters, a Cassini-like spacecraft could substantially enhance our knowledge of these moons, but future orbiters would still be needed in the future.  For comparison, imagine if instead of orbiters around Mars, we had only a dozen flybys of that world by Cassini.  We would have global maps of what was there, but likely only a limited understanding of the processes that created the surface.

It's also reasonable to speculate how the missions might change if only one of the craft eventually flies.  JGO would not be designed to handle the radiation fields inside the oribit of Ganymede, so it would be difficult for it to add significantly to our knowledge of Europa and Io.  The JEO mission, however, could be lengthened to provide additional flybys of Callisto and Ganymede to extend high resolution coverage.  In theory, additional Io flybys could also be done, but the tradeoff there would be the additional radiation exposure that each of those flybys would cause.

All images except the opening Mercury image are from these two presentations made at the last OPAG meeting:


Note: Jason Perry has excellent summaries of what JEO could do during its flybys of Io at