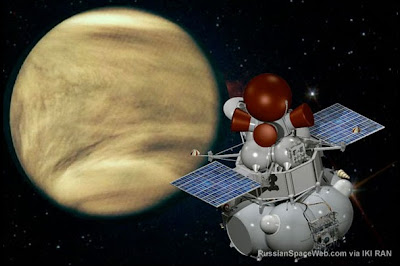 The BBC has a long article on plans for Russia's Venera-D lander. The mission would include an orbiter, a lander that would survive on the surface for a day, multiple balloons, and perhaps even a free flying kite. Details on the mission apparently haven't been worked out. Russia recently hosted a conference inviting international participation in the mission. The current launch target is for 2016, but the French space agency CNES has said a delay until 2018 would be needed for it to participate. The article points out that the recent delay of the Phobos-Grunt mission could have a ripple effect, pushing Venera-D to 2018.

Editorial Thoughts: It's good to see Russia building on its Venus mission experience with a return to this planet. This is an ambitious plan. It's equivalent to at least a small flagship mission (~$1.2B) in NASA's planning.

The solar system is a large place. The bulk of NASA's planetary spending for the next decade is likely to go to Mars and Jupiter-Europa. ESA's planetary budget will largely go to its Mercury mission and (if approved) a Jupiter-Ganymede mission and possibly a series of joint Mars missions with NASA. Venus has been an ignored step child for too long. Venus Express broke a long drought in missions, and it will soon be joined by a Japanese orbiter. It's been 26 years since a probe (the Soviet Union's Venera 16) entered the atmosphere, though, to conduct in situ measurements.

I hope that Venera-D will be just the first of a series of Russian missions that will involve the world-wide Venus science community.