Next Steps for Mercury Exploration 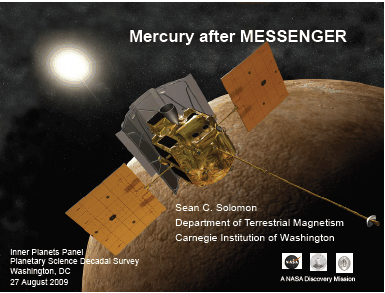 In the first of a series of missions that will look at possible priorities for inner planetary missions, this post will look at future goals for Mercury exploration.

In the Decadal Survey Inner Planets panel meeting, a single presentation looked at Mercury goals. Missions in progress (NASA's Messenger which will enter orbit in 2011) and ESA/JAXA's BepiColombo orbiters (to enter orbit 2020) will provide a detailed examination of Mercury's surface, interior (through gravity mapping), and magnetosphere. The next logical step would be Mercurian landers or a sample return, but those are challenging goals (more on that in a bit).

The reasons for exploring Mercury. From http://www.spacepolicyonline.com/pages/images/stories/PSDS_IP1_Solomon_MESSENGER.pdf
From 2011 through 2012 and possibly into 2013 with an extended mission, MESSENGER will provide the first detailed global examination of Mercury. This mission, though, is a Discovery mission (~$450M), although it manages to cram eight instruments weighing 50 kg within that budget.

BepiColombo, by contrast, will have two orbiters, one optimized to study the surface and the other to study the magnetosphere. The two craft will carry 16 instruments instruments between them. The mission's ESA budget at ~770 euros (not including instruments) is equivalent to a small to medium flagship mission flown in NASA's budgeting.

From http://www.spacepolicyonline.com/pages/images/stories/PSDS_IP1_Solomon_MESSENGER.pdf
The combination of the two missions is equivalent to flying the Galileo mission to Jupiter with the Jupiter-Europa flagship mission scheduled to follow it eight years later (instead of 25 years later as will happen -- keep your fingers crossed -- for Jupiter).

The presentation to the Inner Planets panel listed two possible goals for follow on missions to Mercury. The first would be a lander or a sample return to provide in situ measurements of the surface composition. The other would be a lander to explore the polar regions of Mercury and their ice fields.

Editorial Thoughts: Post BepiColombo exploration of Mercury clearly is beyond the scope of the current Decadal Survey. Both the Messenger and the BepiColombo missions will revolutionize our understanding of this world. Planning for lander and sample return missions should await their results. Whenever these missions are planned for, landers for Mercury will be difficult. It is a hard world to reach because of its location deep within the gravity well of the sun. (MESSENGER requires multiple planetary gravity assists while BepiColombo will use an ion propulsion stage plus five gravity assists.) Once the lander arrives, it will have to deal with three month nights, long durations out of sight with Earth, and surface temperatures that can reach 600 degrees C at the equator. This seems like a full Flagship scale mission.

To me, the key measure of Mercury's importance to the planetary community will be whether the Decadal Survey recommends allocating resources to developing technologies to enable missions in the 2020s.