The coming crunch in plutonium-238 supplies to power planetary missions to destinations with limited or no solar power options has been discussed several times in this blog (see Resources, below). The plan had been to deal with this problem in two ways. First, NASA would switch from using the MMRTG power systems to ASRG power systems, reducing demand for plutonium by about a factor six. Second, the United States would fund the creation of new facilities to produce new supplies of plutonium.

The first part of the plan is moving forward, and NASA has announced that an ASRG power supply will be available for the next Discovery mission. (Proposers do not have to use the ASRG, but since NASA wants a flight test of this technology, proposers who do propose it would seem to have an advantage.) Unfortunately, SpaceNews reports that Congress has decided not to fund the start up of the new facilities planning in the FY10 budget.

At first glance, Congress' stance seems uninformed. However, careful reading of a National Academy of Sciences report on the topic shows the issue to be more nuanced. Someplace between half and two-thirds of the projected use of plutonium-238 were projected to support manned exploration of the moon in the 2020s. That exploration is now seriously in doubt as the United States rethinks is manned exploration plans.

I put together the following table using figures from the National Academy report. Red figures show a deficit supply. The two columns of plutonium-238 requirements vary only in the amount of plutonium used by JEO. 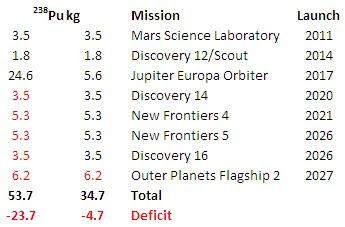 In a time of record budget deficits and uncertainty about whether there is an immediate plutonium-238 supply problem, Congress decided to not fund the start up of a new supply until requirements become clear with the announcement of a new manned exploration program by President Obama. Unfortunately, the delay likely will put NASA in a bind for JEO planning. The agency doesn't want to commit a $3B mission to an unproven technology. My guess is that NASA might now decide to delay JEO to around a 2020 launch to give ASRG technology more time to mature. (I suspect that other budget concerns would delay the launch to that time frame, anyway.)

Also, if you do a search for ASRG on this blog (see search window in upper left top banner), you can find summaries of several potential Discovery missions that would use this power supply.