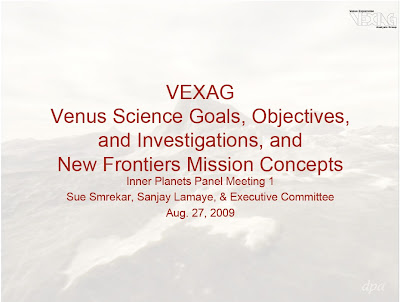 The Venus Exploration Analysis Group (VEXAG), which provides inputs into NASA's Venus exploration plans, has posted a presentation on possible New Frontiers ($650M) missions to Venus. The same group has also proposed a >$3B flagship mission to the same world. That mission would be composed of an orbiter/data relay that would image small portions of the planet with radar at ~5 m resolution. (The strategy is similar to the HiRise camera used at Mars, which photographs a small fraction of that globe at high resolution.) Two balloons would conduct long term atmospheric measurements while two landers would survive at least a day to make detailed chemical measurements of the surface. This presentation will serve as input into setting priorities for planetary exploration in the Decadal Survey.

The first part of the presentation lays out the case for exploring Venus. It's a long list, but key argument is that Venus is the third example of a terrestrial planet with an atmosphere. While Mars has received considerable attention in the last 15 years, only the Venus Express mission has conducted in-depth studies of that world in the same time frame. Studying Venus provides a contrast that can help us understand the role of early planet evolution, plate tectonics, and atmospheric change on the evolution of terrestrial worlds. The three primary questions that underlie the goals for Venus exploration are:


The missions proposed in the presentation are pieces of the Flagship proposal. They are:

Venus In-Situ Explorer (VISE) that would be a combination atmospheric probe to measure atmospheric composition to the from the upper atmosphere to the surface and then measure surface composition. The focus of this mission would be to understand the accretion of terrestrial planets including whether Venus had an ocean, how the atmosphere has evolved, and the type of volcanism. Instruments would include, "cameras, spectrometers, NMS/GS [neutral mass spectrometer/gas chromatograph], meteorology package," and instruments to, "determine mineralogy, elemental composition, and surface texture." While the presentation is silent on the topic, this would presumably be a short-lived lander that would function for only one to a few hours on the surface.

Long-lived balloons with drop sondes and a data relay orbiter to address the question of how the planet's atmosphere works. Apparently multiple balloons would be used that would float at different altitudes and each carry a gas chromatograph/mass spectrometer, radio tracking, an atmospheric structure instrument, a nephelometer to measure cloud particles, a lightening detector, and a TLS (tunable laser spectrometer?). Drop sondes would be released from the balloons to drop to the surface and would carry one or more instruments for trace gas measurements, imaging the surface, and measuring pressure and temperature. (No details on how many drop sondes per balloon or whether they would function all the way down to impact on the surface.) The orbiter would carry a near infrared imager and topographic radar (which presumably would measure only surface elevations and not image the planet).

Venus Global Surveyor orbiter that would focus on the evolution of the crust, shallow interior, and search for active volcanism from a circular orbit. The instrument list includes a radar altimeter, imaging radar, and a near infrared imaging spectrometer. No information is given on the potential resolution of the radar images, although there would presumably be more detailed than Magellan's.

Next Generation Geochemical Lander would focus on surface composition and gasses trapped in the surface material to study how the crust formed and the chemical interaction of the atmosphere and surface. The lander would be targeted to a site expected to have vesicular basalt (so trapped gasses can be examined) and would survive for 24 hours to allow detailed chemical analysis. The choice of sampling site(s) near the lander would be made by operators on Earth, so this wouldn't be a blind sample grab. Instruments would include a 10 cm depth drill, mass spectrometer, x-ray diffraction, x-ray fluorescence, cameras for descent and surface panoramas, and a microscopic camera.

Geophysical Lander to study the interior structure and thermal evolution. Details on this idea are limited (and it is new to me, so perhaps it is a recent concept still being fleshed out). Instruments would include a magnetometer, a corner cube reflector (to allow precise location determination by radar, although I don't know if this would be from an orbiter or from Earth), electromagnetic sounding (presumably to detect subsurface layering), heat flow (I was under the impression that heat flow measurements are both hard (they've only been done for the Earth and moon) and require long times, so I'm not sure what approach would be used), and panoramic camera, and a gamma ray spectrometer (presumably for bulk surface composition measurements). 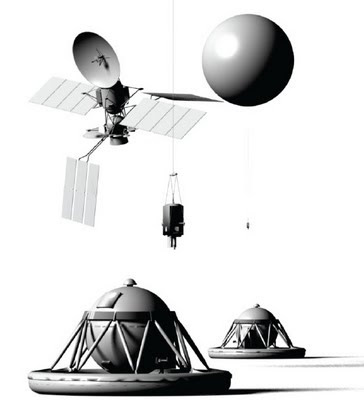 Editorial Thoughts: Two immediate issues come to mind for me. The first is how many of these missions would really fit within a $650M New Frontiers budget. The VISE and long-lived balloons have both been proposed for previous New Frontiers competitions, so they seem like the most likely candidates. I sat in on a VEXAG-sponsored meeting last December and the comments there were that the Flagship orbiter with high resolution imaging and the long-lived (24 hours (this is Venus, so long-lived is relative!)) landers would cost approximately a $1B each. Perhaps the orbiter listed here is less capable and flying just a single lander (instead of the two planned for the Flagship mission) reduces costs sufficiently. I have no idea how difficult the other two missions would be to conduct.

The second issue is that this is a long list of missions. Realistically, only one -- and at the outside, two -- would likely fly in the next decade. What is the priority for these missions? From the last Decadal Survey (completed in 2003), VISE was the highest priority (and it still hasn't flown). What is the priority now? I hope that VEXAG will make this clear as this Decadal Survey progresses over the next few months. One factor that could change the priorities is Russia's plans to send Venera-D to Venus in 2016 with an orbiter to conduct radar imaging at higher resolutions than Magellan did and to send a short-lived lander to the surface. Apparently this will be the first in a series of new Venus missions for Russia.

If Russia is successful and shares the data with the world-wide scientific community, then the urgency for NASA to prioritize Venus might be less. (Or perhaps there are still key holes that NASA could fill, hopefully in cooperation with Russia.) The solar system is a big place, and it would be easy to argue for making Mars, Venus, Jupiter/Europa, or Titan/Enceladus the focus of any single space agency's priorities. Perhaps Russia could focus on Venus and NASA and ESA on Mars and possibly Jupiter/Europa.