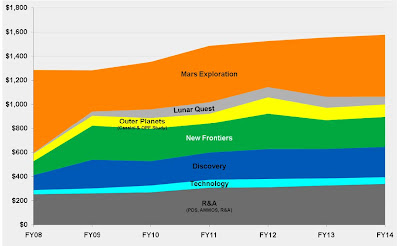 Proposed spending in FY10 Budget Proposal
The last blog entry, Scary Messages, talked about the gap between NASA's planetary budget and its ambitions. The Decadal Survey has the job of deciding which missions and programs get funded. The current budget forecasts funds the Mars program at ~60% of historic levels and doesn't have the funds to fly the Jupiter Europa Orbiter (JEO).

In this blog entry, I want to explore some ideas to give a feeling for the types of solutions that might be available. I'm not trying to sell anyone on any particular plan -- my opinion counts for less than squat in this process. This is an exercise to explore the option space for educational purposes.

We'll start with the current projected budget. In the following chart, I average the projected spending on mission programs as presented in the FY10 budget proposal and then multiplied the figures by ten to get an estimated decadal spending amount (all figures are in millions): 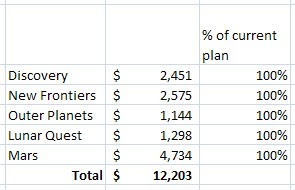 At the rate of three Discovery missions per decade, each Discovery mission costs ~$817M. The two expected New Frontiers missions cost around $1.3B apiece. This figures are higher than the normally quoted $450M and $650 million per mission for these two programs. Those lower figures are the amounts that the Principle Investigators receive. On top of that, NASA has to buy a launch and pay for various kinds of overhead.

In all my options, I make three assumptions. First, the Discovery and New Frontiers programs will continue with target of three and two launches per decade, respectively. These are extremely popular programs with the scientific community, and I don't expect them to go away. Second, I assume that the Lunar Quest program does go away as a line item. I expect that all lunar programs at NASA will get de-emphasized now that it appears that NASA astronauts will not be returning to the moon anytime soon. In doing this, I make no statement about the worth of the missions in this line item. They may eventually be funded as Discovery or New Frontiers missions. The third assumption is that the budget available for the entire decade can be projected from the FY10 proposed funding plan.

The planned Mars funding buys what the current head of NASA's science program calls 60% of a Mars program (compared to funding levels of the previous decade). That comes at a time when the minimum cost of meaningful Mars missions seems to be moving to the $1B to $1.5B range, each. NASA plans to make up for this shortfall by pooling funds with ESA to create an international Mars program.

In this option, the Outer Planets line item, Lunar Quest line item, and part of the Mars line item go to fund JEO. (I'm ignoring the fact that Cassini operations are funded out of the Outer Planets line item. I presume it will still be funded, but lack the detailed budget numbers to subtract it. These are back of the envelope estimates!) The Mars program takes a 16% cut from its currently planned levels. there's no changes to the Discovery or New Frontiers programs. (Percentages in all cases refer to the percent of funding based on a run out of the current budget plan.)

I am sure that there are many interesting planetary missions that can be flown for $450M (the current PI funding for Discovery) or $650M (ditto for New Frontiers). However, many of the interesting planetary questions seem to require more money than then program can afford. This is especially true for the the New Frontiers program. A great many interesting missions seem to come in around the $1B mark: Venus landers, comet sample returns, Ganymede orbiter, high resolution mapper for Venus, to name but a few. In this option, Discovery missions (three per decade) are raised to $650M for PIs and New Frontiers missions (two per decade) become small flagship missions for $1B for PIs. (Although at $1B, these missions may be out of the class of what a PI can lead and may revert to a laboratory such as JPL or APL managing the missions.) Mars funding is held to the currently planned levels.

In this scenario, there would be funds for a small flagship mission to an outer planet destination, perhaps a Jovian icy moons observer or a Titan/Enceladus observer and relay for in situ Titan probes.

Editorial Thoughts: Picking a favorite among these options is a personal choice of which solar system targets you favor. I'm personally torn between options two and four. I believe that we need to up the spending caps for Discovery and New Frontiers missions to address high priority science questions that just can't be answered within their current budgets. Whether or not you prefer option two or four depends on whether you find Mars or the outer planets more interesting. I switch preferences about every day.

I hope that you will submit your preferred alternatives either to the comments or e-mail them to me at vkane56[at]hotmail.com