There's an 800 pound (around 400 kg :>) gorilla hanging around discussions of future planetary exploration discussions. The supply of plutonium available to power future missions is limited and likely to be exhausted in the next decade.

NASA has long used plutonium 238 as an electrical power source for missions that could not use or depend on solar power. (The power units use the high heat produced by this isotope to generate power -- they are not nuclear reactors. The correct term is radioisotope power system (RPS)) To date, these have included eight outer planet missions, two Mars surface missions (the Viking landers), and six lunar science stations for the Apollo program. In addition, the Mars Pathfinder and MER rovers have used small amounts of plutonium 238 as heat sources to help keep them warm.

For the future, NASA plans to use plutonium to power the Mars Science Laboratory rover, the next outer planets flagship mission, and possibly a Discovery mission and or New Frontiers mission or two. (At one time, the Solar Probe, which would graze the atmosphere of the sun, was to be plutonium powered, but that mission is now planned to be powered by solar panels.) After that set of missions, it appears that the stockpile of plutonium will be gone. 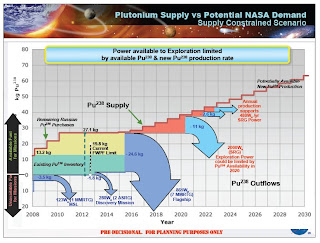 Planned uses of available Pu238. Even if production were restarted at a cost of several hundred million dollars, availability will ramp up slowly, making availability for post 2020 missions an issue. Click on image for more readable version or read the entire presentation here.
Unfortunately, plutonium 238 is no longer being manufactured. NASA currently is purchasing plutonium 238 from Russia to enable the future missions listed above., and its stockpiles are unknown (at least publicly) but the expectation seems to be that supply is limited. Production could be restarted, but at a cost of several hundred million dollars, or the price of a planetary mission.

Advances in solar cell technology could somewhat relieve the pressure to use RPS to enable outer planet missions. It appears that solar cells could be used out to 10 AU, which would enable missions to Jupiter, Saturn, and inner Centaur bodies. However, there are issues. Radiation degrades solar cell performance, making the use of solar cells for Jovian missions challenging if the probe is to study Europa or Io. (The solar powered Juno orbiter uses a "hole" in the radiation belt close in to Jupiter plus a short mission lifetime to avoid this problem.) Even when the radiation can be avoided, large solar cell panels add weight, make instrument pointing difficult, and may require battery backups for eclipses and times when the cells cannot be pointed at the sun. For missions to Saturn or Centaur bodies, the power levels available would be low. 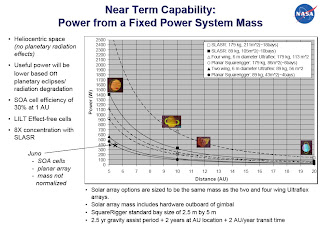 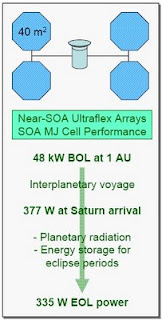 Saturn orbiter power concept. After Cassini, would a 370W power supply enable exciting missions at Saturn? For a Titan orbiter, the craft would have to deal with even less since Titan would block the sun for a portion of most orbits. The proposed Titan Saturn Flagship mission would have 540 W of power at end of life (EOL).
In a worst case reading of the situation, the solar system available for exploration could shrink to the inner solar system. Of course, smart people have been working on this issue. The next several posts will deal with ideas to work around the plutonium supply limitations (under the assumption that production doesn't restart).

If you don't want to wait to read more, Emily L. did an excellent write up on the problem and one approach in her blog.