Mission Costs by the Metric Ton

I just came across (thanks to a lead from New Scientist magazine) an interesting National Research Council (NRC) report. The NRC is a quasi government body used by the U.S. government to carry out scientific assessments of various topics. In this case, a panel of scientists considered whether the heavy lift offered by the Constellation system (to return astronauts to the moon) could enable key new missions. In a nutshell, no. The missions studied either don't need the launch capability, could be done with other launchers (such as the Delta IV), or have other technology development requirements. For those interested, there are discussions of a number of interesting astronomy, planetary, and solar missions. (If you sign in with your e-mail under the link in the pdf table, you get a link to download the entire report.)

What I found most interesting though was the chart below that showed how mission costs could be plotted as a combination of weight (as a surrogate for design difficulty and cost of procurement, assembly, and test) and mission difficulty. Large missions in the Cassini weight class would range from ~$3B-~$7B depending on mission difficulty. What is immediately obvious is that missions that begin to exploit the launch capabilities of the Constellation system would likely fall in the $5B-$15B range. Such missions would eat up the entire science budget of NASA for years. To a lesser extent, missions using the Delta IV heavy launcher would also dominate the science budget. My reading of this is that the science program is budget constrained, not launch constrained. 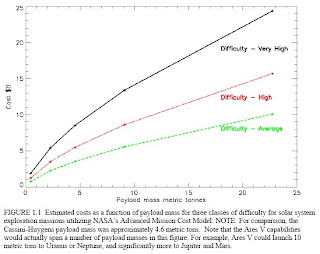 From page 6 of the report. Click on the figure for a more readable version.