Budgets are likely to be a major point of discussion for future U.S. planetary exploration in the next few months for several reasons: (1) the Mars Science Lab (MSL) budget overrun, (2) a new President with new priorities, (3) a highly unusual mid-year budget, (4) the economic downturn while funding two wars. At the end of the day, planetary exploration is a luxury done by nations with funds not needed for necessities. There are good reasons we do these missions -- fulfill humanity's need to explore, expand scientific knowledge, drive the creation of new technologies, inspire our youth to enter science and engineering careers. Given everything else happening, NASA's budgeting process is likely to be even more bizarre than in most years.

In the United States, the President proposes a budget, but the Congress actually appropriates the money. (There's also a step, not done in all years of Congress authorizing a budget that is usually different than both the President's request and the final appropriation. Basically, the authorization is meaningless legally and financially but it allows politicians to show their support for programs without having to give them any money.) The President's budget proposal is delivered every year in late January or early February. Congress is supposed to then appropriate money by the start of the next fiscal year (FY) on October 1. Budget disagreements in recent years, however, have been so great that for many programs Congress has simply passed a continuing resolution that says the program will be funded at the previous year's level. NASA currently is operating on such a resolution, which has kept FY09 spending on the planetary program at FY08's $1,158M level instead of the President's proposed $1,330M level. This represents a funding cut of 13% below what NASA expected to carry out its planetary program.

In a possibly unique move, Congress has said that it will revisit the appropriation for all government agencies operating under a continuing resolution next March once the new President has made his priorities clear. The budget for the planetary program could remain at FY08 levels, go up, or go down. (My guess is that there would be little change. NASA is small potatoes compared to the rest of the budget.)

All of this makes it crazy hard I'm sure for NASA's managers to operate in in normal years, and even more so now that they know they have to make room for an additional $400M in MSL funding in the next two fiscal years.

Here is how NASA had planned its future spending last winter based on the President's proposal. This is from a presentation by James Green last March to OPAG. My apologies that the slide is clipped; it is that way in the posted presentation. 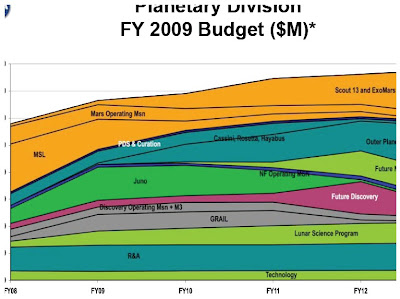 Eyeballing the chart, it appears that the funding wedge planned for the Mars program in FY10 and FY11 would almost cover the additional funds needed by MSL. After this chart was presented, NASA decided to push out the development of the next outer planet flagship mission, which (again by eyeballing the chart) partially covers the funding loss caused by operating under a continuing resolution instead of a larger appropriated budget. Taking funds from either the Juno or GRAIL missions looks like it could be counter productive. It looks like both enter their full development this year. If their launch is delayed, the development teams need to be kept together, potentially increasing their cost dramatically. (The time to delay a mission is before the peak funding and staffing occurs. )

These funding wedge charts may seem boring, but they are at the core of future mission planning. An agency has x dollars or euros (or name your favorite currency) to plan to spend for each year and the mission development and operations occur over a span of many years. What makes these charts so dynamic is that the funds expected to be available change yearly (in the U.S.; ESA has multi-year budgets and I don't know about other agencies) and the funds needed by missions change as they develop (for example, MSL's cost overrun). An agency can only commit to a new mission when a funding wedge becomes available and sometimes must cancel a mission when a funding wedge disappears.