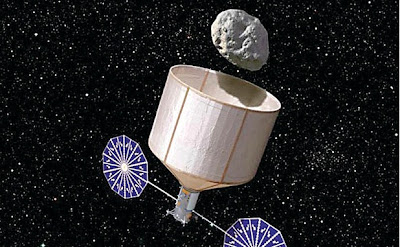 
Aviation Week and Space Technology reports that the President’s next budget request for NASA will include funds to begin developing a mission to bring an asteroid to the Earth-moon system.  The initial goal will be to provide a destination for a manned mission to an asteroid, but if the idea works, it could kick start asteroid mining.

The insight behind the mission is that it’s technically easier and cheaper to bring a small asteroid to where it can easily be reached by a manned mission than it is to send astronauts to an asteroid.  This may seem counter-intuitive.  The feasibility study that proposed the idea defined a small asteroid as around 7 meters in diameter with a mass of 250,000 to 1,000,000 kg.  The robotic spacecraft will have to travel to the asteroid, match its spin, net it, de-spin it, and then drag it back to the Earth-moon system.  However, robotic spacecraft and asteroids don’t require complex life support systems and near fail safe engineering systems.  If the robotic mission fails, it’s a shame.  If a human mission fails with the loss of the astronauts, it’s a catastrophe.

This concept was originally proposed last year in a study carried out by the Keck Institute for Space Studies at the California Institute for Technology (which is also home to the Jet Propulsion Laboratory).  The study participants included scientists and engineers from a wide range of institutions.  You can read the report here.

The mission would be enabled by three key developments.  First, we need the technology to be able to find a number of very small asteroids so that one can be selected with the optimum trajectory, size, and spin.  (An asteroid spinning too fast would exceed a spacecraft’s capacity to de-spin it.)  The desired C-type of asteroids would be dark and spotting them is considered by at least one of the authors of the feasibility study as the toughest part of the concept.  The size of the target asteroid was selected as the smallest that was believed to be detectable in large enough numbers to find a good candidate.

Second, high powered solar electric engines would be needed to be able to transport the asteroid back to the Earth-moon system.  The spacecraft will need to simultaneously operate four 10-kW engines to enable the mission.  For comparison, the total power system for the Dawn spacecraft, which also uses ion propulsion, is 10-kW.  Bringing the asteroid to the vicinity of the moon puts it near the top of the Earth-moon system’s gravity well and greatly diminishes the propulsion requirements for the mission compared to bringing the asteroid to lower Earth orbit.  A near lunar destination also minimizes the risk of impact with the Earth (it’s impolite, to say the least, to drop a small asteroid in someone’s back yard, although a C-type asteroid would likely disintegrate before reaching the Earth’s surface).

The final key development will be the launch system and spacecraft needed to deliver astronauts to the asteroid.  NASA already is working on these – the Space Launch System and Orion spacecraft.  What it has lacked has been a credible use for the system.  Flights to near Earth asteroids require months or years to a destination that lacks drama, lunar missions require landers that aren’t funded, and Mars is a distant dream.  What the proposers of this scheme – and now NASA, apparently – believe is that a relatively short flight to an asteroid brought to our backyard would be a winning combination.

Once an asteroid is returned, what would the astronauts do?  The proposers suggest that early missions would be focused on scientific examination, testing operations near and on a tiny body, and validation of methods that eventually could lead to mining and processing the asteroid’s material.  C-type asteroids are rich in volatiles and conveniently have the consistency of dried mud, simplifying mining.  A 7 m carbonaceous asteroid is estimated to contain 100 tons of water, a similar amount of carbon-rich compounds, and 90 tons of metals (mostly iron).  A key problem with enabling human exploration beyond the moon is the cost of delivering fuel and water beyond low Earth orbit.  One or more small asteroids could become fueling stations for missions two or three decades from now.

The cost to deliver the asteroid to the vicinity of the moon was estimated at $2.65 billion, or somewhat more than the cost of the Curiosity Mars rover mission.  The human spaceflight system is being paid for separately.  The proposers do not give a cost estimate for developing and operating the mining equipment.  For the coming year, NASA reportedly will ask to $100M to refine the technical requirements of the asteroid capture spacecraft and operations.  A launch to an asteroid presumably would not occur until the end of this decade or early in the next.

Editorial thoughts: As a scientific mission, I don’t know how the science community would rank an asteroid retrieval.  For the same price as the $2.65B cost estimate, NASA could fly a Europa mission, conduct sample returns from several types of asteroids, cover much of the cost of a Mars sample return, or fly an orbiter and probe to Uranus.  (In reading the proposer’s report, it appears that the technical analysis of the mission is in the early stages.  I would not be surprised to see the final cost of the mission be substantially more than the current estimate.)

However, if humanity is to move into deep space, then this mission, I believe, could a brilliant interim step.  It would provide a target for sustained operation at the cusp of deep space, much as the early Gemini missions tested the technology and operations that led to the success of the Apollo mission.  The asteroids brought back could also provide the raw materials needed to enable missions deeper into the solar system.  (Bringing back other types of asteroids could also provide more valuable metals that might be mined for return to Earth.)

At the moment, political leaders have not been willing to fund bold initiatives for human spaceflight.  Perhaps the greatest value of this mission would be that it would enable forward momentum so that future politicians can make the bold choice.