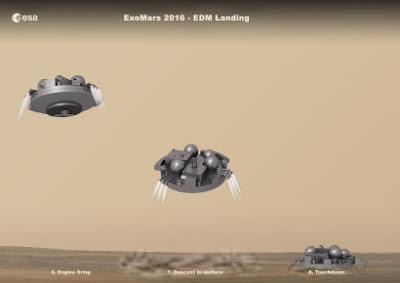 This week’s Science journal included an article on the challenges facing the Curiosity rover in its hunt for organic molecules on Mars.  (Unfortunately, the article is available by subscription only.)  Complex organic molecules would be a clue that Mars may have once harbored life or at least the conditions that allowed for complex pre-biotic chemistry to occur.  Three spacecraft, the two Viking landers and the Phoenix lander, have so far tested Martian soil for organic molecules and come up with negative results.  (Although some argue that the natures of the failures suggest instrument limitations rather than the lack of complex organics.)  The failure to find organic molecules suggests that processes on Mars are destroying organic molecules since the surface is subject to a steady rain of meteorites that contain less complex organic molecules.  Per the article, researchers have identified three mechanisms that may be destroying organic molecules at and near the surface of Mars: oxidizers in the soil including the perchlorate salts found by Phoenix, ultraviolet radiation, and cosmic rays.  The article states, “With decomposed perchlorates, cosmic rays, and ultraviolet radiation ganging up on Martian organic matter, Curiosity's chances of finding it when it scoops up its first soil samples are looking slim. And ‘if we find [soil] organics, it almost certainly will have nothing to do with life,’ says astrobiologist Christopher McKay of NASA Ames. The most likely organics in soils would be those of cosmic dust because they are continually resupplied, so detecting organics is not detecting life,’ he says.”

One of the challenges facing Curiosity’s hunt for organic molecules is that its drill can sample only 10 centimeters into a rock or into the regolith, not deep enough to avoid the agents that destroy organic molecules.  ESA’s ExoMars rover has been designed to sample up to two meters beneath the surface, below the reach of surface destroyers of organic molecules.

ESA has continued to redesign the ExoMars mission with Russia as its only partner after the U.S. declined to participate.  European financing for the total bill remains a challenge and the final resolution isn’t expected until this Fall.

ESA recently published a newsletter on the current state of the mission definition.  The 2016 Orbiter will carry two European instruments – the NOMAD spectrometer to map trace gases and a high resolution stereo color camera.  Russia will supply two additional instruments for the orbiter – the Atmospheric Chemistry Suite that will map the structure of the atmosphere (the ESA publication doesn’t discuss why a chemistry instrument will map structure, which typically is measured in terms of temperature and pressure) and a neutron detection instrument to refine measurements of near surface water ice.

A major goal of the 2016 mission has been to test European technologies for landing mid-sized payloads such as geophysical stations.  (The seven minutes of terror to get a payload to the surface of Mars exists for any space agency wanting to land on Mars.  Developing and proving a landing capability enables future lower cost missions, much as the demonstration of the Phoenix system enabled the recent selection of the InSight mission.)  At one time, there was discussion of including a Russian radioisotope power supply to enable a long-lived lander.  Now the plan has reverted to a battery powered lander with a short (few days at most) lifetime.

The brief newsletter also talks about a surface science platform in addition to the ExoMars rover.  It’s unclear what this might be, although a geophysical station might be a possibility.  The supporting web site simply says, “the two space agencies have agreed to send a large capsule to Mars with a surface science platform and a rover carrying both European and Russian instruments. The two science stations will operate in parallel.”  (At one time, before the first descope to reduce costs, the ExoMars mission included a sophisticated geophysical station in addition to the rover.)

Russia will have the leading role in delivering the rover and science station to the surface: “the descent and surface modules will be developed by Roscosmos in cooperation with ESA.”

Editorial Thoughts: First, I hope that enlightened selection of sampling locations (with maybe a large helping of luck) will enable the Curiosity rover to find the organic molecules its instrument suite is designed to find.  A success would enhance chances for funding a robust future Mars program, while a fourth strike won’t be helpful.

Given the challenges of finding intact organic molecules – assuming they exist – I remain a fan of the ExoMars rover mission and hope it secures it European funding this fall.  I am concerned about the 2018 landing mission becoming too complex – ESA has never done a rover mission and Russia has never successfully landed a mission on Mars.  Now the mission has become more complex with a surface science station.  NASA hit a home run with the Curiosity landing and subsequent rover operations, but that was after a string of six successful, and simpler, landings.  ESA’s track record for planetary missions has been excellent, providing confidence for the ESA 2016 orbiter and 2018 rover.  Russia, after the failure of the Phobus-GRUNT mission last year, reportedly is in the process of reforming its design processes.  Landing a good-sized rover and surface station on your first try at a Martian landing in over 40 years is an ambitious goal.  (A recent article in the Guardian makes the same point, but less diplomatically.  Until I hear otherwise, I presume that ESA and RSA are aware of the challenges and taking appropriate steps.)

My fingers are crossed that the budgetary and technical stars align for ExoMars.  The search for signs of pre- or actual biotic organics on the second most Earth-like planet in the solar system is important to the future of planetary exploration.