One of NASA’s key advisory committees, the Committee onAstrobiology and Planetary Science (CAPS), is meeting today and tomorrow.  My schedule permits me to listen to just part of the meeting, but I’ve arranged to listen in to two key portions: Today’s update on the Europa Clipper proposal and tomorrow’s presentation on the future Mars roadmap.  (Casey Dreier of the Planetary Society is also blogging on the meeting and covers sessions I couldn’t attend.)

The Europa Clipper is one of three mission concepts to come out of the demise of NASA’s Jupiter Europa Orbiter proposal that would have cost close to $4B.  That sticker shock led the Decadal Survey to recommend that NASA investigate cheaper mission alternatives.  In previous posts, I’ve describe the minimalistic orbiter and a multi-flyby spacecraft (now dubbed, Europa Clipper) and concepts for Europa landers. 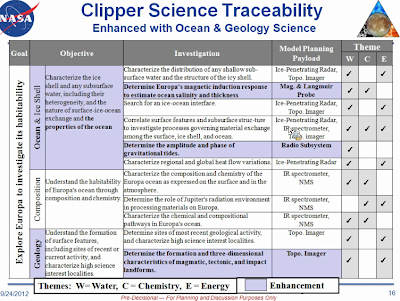 This minimalistic instrument set left key goals to a future orbiter mission that would use measurements of the interaction of Jupiter’s magnetic field with the ocean to directly explore the ocean’s characteristics.  (Similar, but less precise measurements than those planned for future Europa missions allowed the Galileo spacecraft to all but prove the existence of Europa’s ocean).  Also left to an orbital mission were the precise gravity measurements that would measure the amplitude of tides in the icy shell that would provide a second validation of the existence of the ocean and also study the tidal forces that restructure the icy shell.

The Clipper definition team listened to a request from the scientific community to enable the magnetic and gravity measurements from a flyby spacecraft.  The new baseline proposal has added a magnetometer, a Langmuir probe (which allows scientists to separate the changes to the magnetic field from Europa’s ocean from transient changes caused by variations of the local plasma field), and a dedicated, gimbaled antenna that can remain pointed at Earth during flybys to allow precise radio measurements.

In parallel, the studies of possible Europa lander missions lead the Clipper definition team to realize that any future landing missions would need high resolution, stereo imaging of possible landing sites.  A thermal imager would also help characterize the size of icy blocks at the surface.  (Small particles the size of gravel would cool fastger following sunset or heat up faster following sunrise much faster than say boulder sized ice chunks.  A lander needs a site with small particles on the surface, not boulders.)  To enable a future landing mission (which may be a decade or two after the Clipper mission eventually flies), the definition team has added a high resolution camera and a thermal imager to the payload.

Unfortunately, these additional instruments and their integration into the spacecraft raised the estimated cost of the Clipper mission from a bit under $2B to approximately $2.2B.  However, the definition team also has begun looking at replacing the previously planned plutonium-based power supply with solar panels.  The early analysis is positive, and if it can be done, the net savings bring the Clipper mission’s cost (not including the launch vehicle) back down to around $2B. 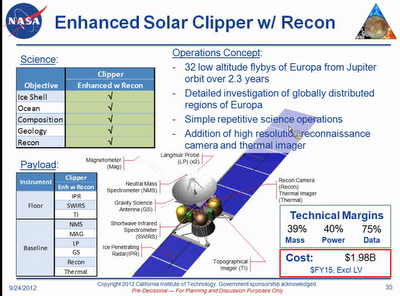 This will be an awesome mission.  Unfortunately, NASA’s projected budget, which covers the next five years, doesn’t provide funding for this mission.  I can be pessimistic and think that a dedicated Europa mission has been a top priority for over a decade and is no closer to being funded today than in 2000.  However, the quality and cost of this mission gives me hope:  Excellent(!) science without requiring new technology development (as most previous Europa mission proposals did) for a cost well below what the Mars Science Laboratory Curiosity cost (especially when Curiosity’s costs are inflated to the 2015 dollars used for all of the Clipper cost estimates).

Big science missions in the past often have required a decade or two to go from concept strongly supported by the science community to a funded project.  (Curiosity was one of the rare exceptions.)  We now have a crisp, credible proposal on the table.  Things are tough now, but they have been before (some of you may remember when NASA’s planetary program almost was shut down around 1980).  Tonight, at least, I’m optimistic that Clipper or a descendent of the proposal will be funded, perhaps a decade from now.

In the meantime, if there are any multi-billionaires who read this blog, can you spare a couple for a good cause?