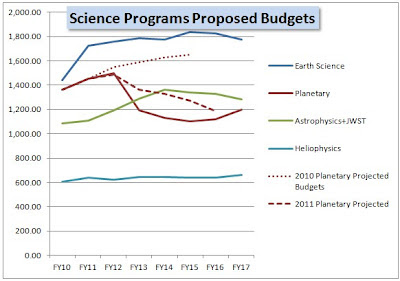 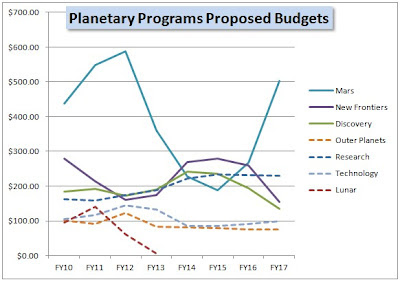 Graphs derived from budget data from NASA FY13 budget proposal documents.
Numbers in $Ms.  Click on images for larger versions.
The big news of the President's FY13 budget proposal had already leaked: The budget proposes to end NASA's participation in the joint ExoMars program with ESA.  The money saved is put towards the completion of the James Webb Space Telescope (JWST).


The proposal calls for a new series of Mars missions, possibly conducted with international partners, with serious development to begin later in the forecast period (which projects budgets out to FY17).  The missions would not be Flagship class, but would rather be "medium class".  Serious definition of the new Mars mission sequence would occur over the next few months.  Goals for the missions would be a synergy between those to enable future human missions, science, and technology development.  The first mission might fly as early as 2018.


The budget forecast shows a steep decline in funding for New Frontiers and Discovery missions towards the end of the forecast period, apparently to support increased Mars funding.  The budget documents state that selection for a new New Frontiers mission (which would be the fourth in the series) would begin in 2015.  No date is given for the selection for the next Discovery mission to follow the one to be selected this June.  As previous planned, funding the Lunar program  will end with its goals to be included within the Discovery program.  (Note: The decline in New Frontiers and Discovery missions may represent supporting a peak Mars program funding and may or may not continue beyond the 2017 period projected in this budget.)


If you look at NASA's overall science program, my top level takeaway is that overall funding is approximately flat, with gradual growth in the Earth Science program.  Funds would be switched between the planetary and astrophysics programs to make funding between them more nearly equal.  The planetary and astrophysics programs are both exciting, and what the relative funding should be between them is a judgement call.  Since this is a blog on planetary exploration, you know my preference, but increasing funding for astrophysics can certainly be justified.  Given the US economy and budget pressures, an approximately flat overall budget probably is good news.


I have been expecting the cancellation of NASA's participation in the joint Mars program since NASA announced that it would transfer funding from other science programs to complete the JWST.  The Decadal Survey's justification in the joint program was based on the 2016 orbiter and the 2018 rover being the first steps in a Mars sample return program.  Press reports have stated that the Office of Management and Budget's appetite for a second $6-8B Flagship program -- JWST being the first and a Mars sample return program the second -- was minimal at best.


Various press accounts have mentioned that the immediate cut to the Mars program will be fought by various members of Congress and the planetary science community.  However, the earliest that a revised NASA budget could be approved that would add money back into the Mars program would be late summer at best and possibly sometime late this year or early next.  (Our budgets in non-election years usually are months late; this election year, who knows?)  That likely would be too late for ESA to count on, if it happens.  ESA and Russia will continue their talks on revising the program.  I believe it is an open question as to whether the funds they will have available will enable a program that resembles the currently proposed missions.  I hope so -- they would do excellent science.


To fund the new Mars program, funds apparently would be shifted from the New Frontiers and Discovery missions following the completion of their next missions (OSIRIS-REx for New Frontiers and a mission to be selected in June for Discovery).  If the funding proposed in FY17 were to continue beyond 2017 for these two programs, my back of the envelope calculations suggest that each program would fly about a mission every 6-9 years.  If this were to occur, this would be significantly fewer than the 3 New Frontiers and 4-5 Discovery missions that the Decadal Survey recommended as the core of the planetary program be selected in the coming decade.  While budget projections five years out are just best guesses (that's five annual budgets, two new Congresses, and one to two new Presidents out), these are the numbers that the managers of the Planetary Science program have to plan to.  We will have to see if and how this budget projection impacts the flight rates for these two programs.


The new Mars program appears to replace the priorities laid out by the Decadal Survey should the 2018 Mars caching rover not be affordable.  In that case, the Decadal Survey's next highest priority was a Europa mission followed by a Uranus mission.  This budget appears to replace that priority with a new, to-be-defined Mars program.  Comments by Dr. James Green, the head of NASA's Planetary Science program, made it clear that future budgets would not support starting new Flagship missions to any destination in the solar system within this five year budget window.  In the meantime, the proposed budget supports continued definition of mission concepts and technology development for when budgets do support new Flagship missions.