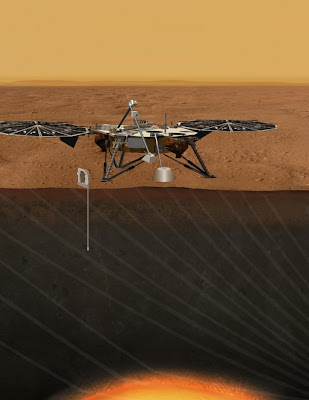 Artist's conception of the InSight lander with the seismometer and heat flow instruments deployed.  Credit JPL.

A couple of weeks ago, before the budget proposal distracted me, I published the first of what will be two posts on the proposed Mars InSight Discovery mission.  Together with the Titan TiME lake lander and the CHopper comet mission, the InSight team is competing for selection this coming June as NASA's twelfth Discovery mission.

This is the second post on the InSight mission; check out the first post for background on the science and previous Mars geophysical mission proposals.

While spacecraft have extensively studied the surfaces, atmospheres, and fields and particles environments for many of the solar system's worlds, the interiors of these worlds are largely terra incognita.  Except for a geophysical network left by the Apollo astronauts on the moon and a failed experiment carried by the Viking Mars landers, the interiors of the planets have been largely ignored.  Geophysicists have had to make do with low resolution gravity maps and modeling to make inferences about planetary interiors.

As I discussed in the previous post on the InSight mission, two major factors make Mars a priority for geophysicists.  The first is simply that in many key respects, the composition and shape of the surface and the composition of the atmosphere are the results of processes that occurred within the interior of Mars.  (The same is true for the Earth.)  Second, Mars' smaller size means that it would have cooled more quickly than the Earth, possibly preserving conditions common to the interiors of terrestrial plants that have been erased in the hot, active Earth's interior.  Exploring the interior of Mars, then helps to fill large gaps in our understanding of the early steps in the formation of the terrestrial planets including the Earth.

Missions to place networks of geophysical stations on Mars to address these questions have been proposed many times -- almost as often as proposals to return samples to Earth, and with the same success.  Ironically, geophysical network missions have been highly ranked by scientific review panels.  However, three factors have left these proposals as the perpetual bridesmaid and never the bride.  First, studying the deep interior of Mars depends primarily on observing strong seismic events but we don't know if they exist on present day Mars.  Second, a geophysical mission should be done with three or more stations to triangulate location of events, which puts this mission into the small Flagship class.  And finally, the priority for Mars has been to explore the surface and atmosphere in terms of past and present habitability, which has left no funds available to mount a geophysical mission.

The InSight mission proposes to be a pathfinder mission.  With a single lander, the mission can establish the level of seismic activity and reduce the uncertainty in many of our models Mars' interior.  In many respects this is similar to the strategy followed to explore the surfaces of the planets.  First send flyby spacecraft (the pathfinders) followed by orbiters (and often series of increasingly capable orbiters).  Similarly, early landers often are relatively simple to answer basic questions with later, more sophisticated landers and rovers addressing progressively more difficult questions.

My previous chart missed two facility instruments that weren't listed on the websites.  InSight will have a panchromatic (black and white) camera on the arm that deploys the seismometer and the heat flow probe.  The camera's primary purpose is to find locations on the surface for these instruments and then verify their deployment.  However, the arm will be moved to create a panorama of the landing site and could be used to watch for surface changes during the mission.  The second facility instrument would measure basic weather conditions -- temperature, pressure, wind speed -- so that the noise from the local atmospheric conditions can be removed from the seismometer's readings.  The weather readings also will be useful meteorological data in themselves.

(My thanks to the proposal team's PI, Dr. Bruce Banerdt at JPL, for the clarification and additional information used in this post.  To all my readers, I do my best, but this is a hobby of mine and not my area of research.  I will make mistakes and oversights.  Corrections published cheerfully.)

Because the InSight station would be solar powered, it is restricted to landing sites within 15 degrees of the equator to maximize average sunlight.  The lander requires an elevation below 0 kilometers elevation to make maximum use of parachute deceleration.  In past proposals, landing sites in the region of the Tharsis volcanoes have been suggested as areas where crustal stress may maximize seismic activity.  I don't know if any safe landing eclipses exist that meet all these criteria, and the team has chosen not to reveal its choice.  (These mission selections are competitive, and if you've identified a sweet landing location, no need to tip off other proposal teams.)

With past Mars landers, we've been spoiled by high activity.  There's the excitement of the initial first views and then roving across the surface to bring something new to our attention every few days or the rushed acquisition of samples.  The InSight mission would fundamentally different.  Once the instruments are deployed and the panorama acquired, this will become a mission of patience.  There are likely to be few large tectonic seismic events, and so much of the data will come from tiny tremblers caused by the tens of meteorite impacts that occur annually, tides from the tiny moon Phobos, and winds interacting with the surface.  The heat flow measurements will build up over time to determine how much heat is being released from the interior today.  The radio tracking study will look for tiny wobbles in Mars rotation that would indicate whether the deep interior is liquid or solid (if liquid, there will be "sloshing" detectable in the radio tracking).  Nominal mission life would be two years.  If dust levels on the solar panels permit, an extended mission would increase the likelihood of hearing multiple larger seismic events.

It's well known that geophysical measurements are best done using multiple stations and previous proposals have focused on at least two and usually four stations.  What can be done with a single station?  InSight likely would detect sufficient seismic activity to probe the structure of the crust and upper mantle, provide a better understanding of the structure of the deep core, and locate the source region of any large seismic events to within several hundred kilometers.  Our models of the interior of Mars will sharpen but remain fuzzy.

Perhaps just as important, the InSight station would finally resolve the questions of how to do geophysical measurements on Mars.  At the moment, we don't know where the active regions are, we don't know what the level of activity is, and we don't know what valid seismic signals and the confounding noises look like.  The InSight mission enables highly tuned follow up missions to study the interior of Mars in detail.

Editorial Thoughts: I believe that the InSight mission can compete on its only on its own scientific merits.  However, the experience it would provide on how to do geophysical measurements on Mars would be just as valuable.  NASA flew two rover designs to Mars to gain the experience needed to develop the Mars Science Laboratory rover on its way to Mars now.  The InSight mission would be a pathfinder to richer geophyscial missions in the future.  In an era where large flagship missions have been ruled out, geophysical missions can provide new knowledge at moderate prices.