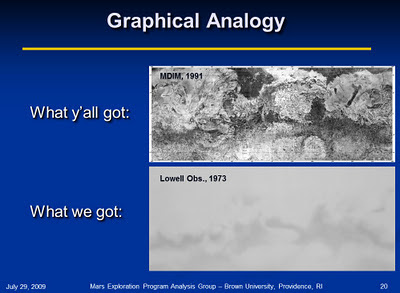 The one-slide justification for a geophysical pathfinder mission to Mars.  While a sequence of missions have given us detailed information on the Martian surface ("What y'all got"), geophysicists have a much poorer understanding of the interior of Mars ("What we got").  From a presentation by the Insight proposal PI Bruce Banerdt at JPL to the Mars Exploration Analysis Group (MEPAG). Dr. Banerdt has spent twenty years working to get a seismometer on Mars (with some interesting detours along the way, such as being the
Mars Exploration Rover (MER) project scientist).
At its core, the Mars Insight mission (previously called the Geophysical Monitoring Station (GEMS) mission) is pretty simple: Duplicate the Phoenix lander, deploy a seismometer and heat flow instrument, maintain a radio link with Earth, and then passively record data for the next two (one Martian) years,   With this post and the next, I’ll explore the justification for this mission and place it within the context of the long line of proposed Mars geophysical missions.  In today’s post, I’ll address two questions:
1)            Why a geophysical mission?
2)            How does the Insight proposal compare to previous proposals?
and then in the next post I’ll address two additional questions:
3)            What can be done with a single station?
4)            How would the Insight mission conduct its studies?
Why a geophysical mission?
Because we live on the surface of our planet, it's often easy to forget that the vast bulk of our planet lies beneath our feet.  The interior of our world is the product of the processes that formed and evolved the Earth and the other terrestrial planets.  In turn, the processes that operate inside the Earth have shaped the surface of our planet and contributed gases to our atmosphere.   The decades of research into the Earth's interior have been essential to understanding our planet's history and current state.
All the reasons for studying the Earth's interior also apply to Mars -- we cannot understand that planet without understanding its interior.  However a geophysical mission to Mars may give us more than just a deeper understanding of that world.   We continue to explore the Martian surface because it retains records of conditions from the earliest history of the terrestrial planets (including perhaps the conditions that led to life).
The Earth's interior retains considerable heat that causes vigorous mantle convection that has erased the record of Earth's earliest interior structure and composition.  Mars is much smaller than the Earth and appears to have lost much of its internal heat early in its history.  As a result, Mars may preserve the internal structure and composition from its early history.  Understanding the interior of Mars may help us understand what the interior of the early Earth was like and serve to constrain our models of how our world evolved.
The 2011 Decadal Survey reports listed the key questions for a geophysics mission:
The 2002 Decadal Survey listed three recommended Mars missions -- the Mars Science Laboratory (on its way to Mars), an upper atmospheric mission (the MAVEN mission in development), and a network of geophysical stations.  Subsequent reviews of Mars priorities continued to rank a geophysical mission highly, but none has gotten beyond the proposal stage.  The 2011 Decadal Survey did not prioritize a geophysical mission because of, "its lower scientific priority relative to the initiation of the Mars sample return campaign," but noted that, "potential Discovery missions to Mars include a 1-node geophysical pathfinder station."  Conducting the first flagship scale mission in a series to return samples from Mars would consume enough of NASA’s planetary science budget that the members of the Decadal Survey could not justify prioritizing a second Mars mission.  They left open the possibility of a limited geophysical mission that might fit within the budget of a Discovery mission.  Insight is a proposal for such a 1-node geophysical station.
How does the Insight proposal compare to previous proposals?
There has been a long history of proposed Mars geophysical missions extending back into the late 1970s at least.  Perhaps only the Mars sample return mission has had as many serious proposals and near-starts without actual approval as a geophysical mission.
Proposals for geophysical missions often are called network missions because the measurements ideally would be done from a network of stations across the surface.  In these posts, I will focus on geophysical goals, however, meteorologists also would like to place a network of stations on Mars.  While meteorologists and geophysicists would propose different types of networks (meteorologists would like many relatively simple stations distributed across the globe while geophysicists would be delighted with regional cluster of three stations and a fourth on the opposite side of the globe), most network mission proposals have included sets of instruments for both disciplines.  (However, the Pascal Discovery proposal in the early 2000's would have landed 18-24 simple meteorological stations on Mars.).
Two geophysical proposals proceeded almost to approval before budgetary issues forced their cancellation.  The French Netlander mission would have landed four stations.  The Humboldtstation, on the other hand would have landed with the European ExoMars rover and made measurements from a single location.
The following table compares the proposed instruments of Insight with those proposed for the Netlander and Humboldt stations: 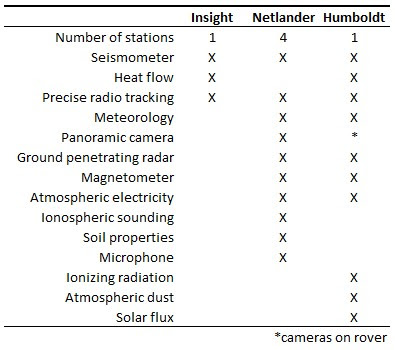 Two observations stand out from this table.  First, there are a wide range of measurements that geophysicists would like to conduct from a geophysical station (and none of these proposals included some additional priority instruments such as electromagnetic sounders that, like the ground penetrating radars, would probe the local subsurface to considerable depths).  Second, the Insight mission has far fewer instruments than either of its predecessor proposals.  To fit within a Discovery budget, this mission would carry the barebones instrument compliment.  There's not even a panoramic camera, although there would be a camera on the arm that deploys the instruments to pick out locations to deploy them.  (I suspect that after instrument deployment, the camera arm might be used to look around at the surrounding scenery.)