"You didn't say things about existing missions. Rumor says that Cassini's going to have a 50% cut to science. At some point it's below the threshold of viability and it will destroy science... Planetary science is on the verge here, and it's not just future missions, it's present missions too."
Statement by a planetary scientist at EPSC/DPS conference last fall as reported by Emily Lakdawalla in her Planetary Society Blog
In my last blog post, I talked about the Senior Reviews that NASA will be holding early this year to decide funding for continuing science missions.  Continued operation of missions past their initially funded prime mission incurs considerable costs.  I've seen quotes of $5M per year to $60M per year depending on the complexity of the spacecraft, the mission activity, and the size of the science team.  To ensure that sufficient funding remains to fly new missions, NASA sets a budget for continuing missions and then periodically appoints a Senior Review panel to recommend the mix of continuing missions to maximize the science return from that budget.  Rumors, as noted in the opening quote, suggest that the budget for continuing missions is likely to be tight and good missions may suffer significant cuts.  We don't yet know what the budget will be for the Senior Review, and may not know until the release of the FY13 budget in approximately a month.  So these are rumors, possibly correct, possibly not.  However, the community is worried.
While this blog has primarily focused on new missions, today I'd like to examine what continued funding for missions can enable using the Cassini mission as an example.  First, though, I'd like to make it clear that I'm not stating a preference for which missions should be continued.  A good case can be made for all the missions up for review (see the list in my previous post), and I certainly don't have the information to make an informed recommendation.  Rather, the Cassini mission nicely illustrates the wide range of what continuing missions as a group can achieve because it is exploring an entire system rather than a single world.  (Well, okay, I'll admit to really liking the Cassini mission, but I have other favorites, too.)
The Cassini mission currently is in its second extended mission scheduled to last -- pending funding decisions based on the Senior Review recommendations -- until 2017.  From a news article, it appears that each year of continued operation costs around $60M a year.  That funding level, if continued, would pay for about three-quarters of a Discovery mission or about a fifth of a small Flagship mission to Europa.  Emily Lakdawalla reports in the same post quoted above that three-quarters of the Cassini budget (~$45M/year) is required to continue operations of the spacecraft at the minimum safe level, and the remainder pays for scientific analysis of the returned data.
So, what is the Cassini spacecraft doing in its extended mission?  The spacecraft is in its second extended mission, frequently called the Solstice mission.  When Cassini arrived at Saturn in 2004, it was winter in the northern hemispheres of Saturn and Titan, equivalent to January on Earth.  In the first extended mission, spring arrived.  When the mission is currently scheduled to end, summer will have begun, equivalent to June on Earth.  Saturn orbits the sun much more slowly than Earth, so the total mission from arrival to end will have been 17 Earth years long. 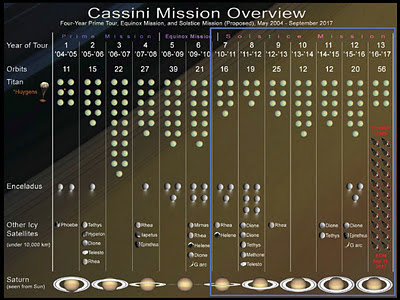 The many planned encounters of the Cassini prime and two extended missions.  In addition to encounter science, the spacecraft will conduct on-going studies of the rings, Saturn's atmosphere, and the magnetosphere.
The science being conducted can be broken down into three types of investigations.  In the first, the spacecraft is examining the Saturn system for changes in time, particularly those brought on by the changing seasons.  In the past year, these observations saw the birth of the Great Northern Storm on Saturn and the spring deluge on Titan that created extensive changes on the surface over an area equal to the states of Arizona and Utah.
A second set of observations extend measurements previously made.  For example, new observations with the cosmic dust analyzer and ultraviolet spectrometer found that the larger grains of ice deep within the plumes of Enceladus are salt-rich, strengthening the case for a subterranean ocean inside that world.  This discovery was made from the close flybys of Enceladus done in the first extended mission.  Similarly, the Cassini spacecraft continues to image new areas of Titan in higher resolutions, explore the composition of the rings, and conduct additional flybys of the other moons.
A third set of observations come under the heading of entirely new exploration.  In all the orbits of Saturn so far, the Cassini spacecraft has been kept well away from the major rings.  At the end of the Solstice mission, Cassini will dip its closest approach to just outside the F ring for 20 orbits.  Then the periapsis will be lowered to fly through the ~3,000 km clear region between the inner edge of the D ring and the top of Saturn's atmosphere for another 22 orbits before finally plunging into Saturn to terminate the mission.  With these orbits, the Cassini spacecraft will conduct science at Saturn similar to that the Juno spacecraft will do with its close-hugging orbits of Jupiter. 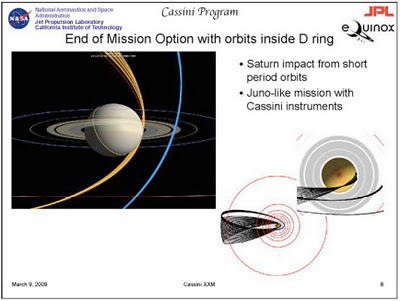 Cassini's proximal orbits from this presentation.
In this final mission phase, new higher resolution studies of the gravity field and magnetic field will allow scientists to better model the deep interior and rotation rate of Saturn.  The close orbits will enable better estimates of the mass of the rings to estimate the age of the rings.  New portions of the magnetosphere and its trapped plasmas will be directly sampled.   (Alas, no one in the 1990s when the mission was planned thought to put a microwave instrument on Cassini like the one on Juno to enable deep probing of Saturn's atmospheric structure and composition.  :>   On the other hand, Juno won't have an extensive ring system to explore up close.)
Cassini provides in a single extended mission examples of the science that extended missions can produce: long term observations of variability and change, continuation of measurements to fill in gaps, and entirely new studies.  Each of the missions in contention for continued funding through the Senior Review would extend our knowledge of the solar system.  The members of the Senior Review will have to choose among an embarrassment of riches.
I'll close with this link to the top 10 discoveries from the Cassini mission in the past year enabled by its continuing missions.  You can also look through this presentation to learn more about the science goals of the Solstice mission (also called the XXM mission.)  This post describes how the Solstice mission was designed.


I'll also reproduce the statement from the Outer Planets Analysis Group on why it believes that the final close flybys of the rings and Saturn deserve continued funding:
OPAG Statement On The Cassini Mission’s Proximal Orbits: Critical Data for Giant Planet & Solar System Origins
Completion of the Cassini mission’s Proximal Orbits is critical to multiple high-priority planetary science objectives. Cassini is poised to perform these orbits near the end of its Solstice Mission, making measurements not possible from previous orbits. These measurements will be a key component of a broad multi-mission data set needed to reveal giant planet and solar system formation and evolution processes from comparisons of the gas giants Jupiter and Saturn, followed by future comparisons of the gas giants to the ice giants Uranus and Neptune. This knowledge is critical to understanding the veritable zoo of different planetary systems now being found around other stars.
Comparative planetology of gas giants is a high priority objective for research into giant planet and solar system formation and evolution [1,2]. Fundamental aspects of these areas are currently unknown, including processes and materials that deliver volatiles such as water and organics to giant planets and terrestrial planets, and time scales for planetary formation and protoplanetary disk evolution. Comparisons among giant planets, beginning with comparisons of Jupiter and Saturn, are a tool for examining the results of these processes and thus the processes themselves. A meaningful comparison of Jupiter and Saturn requires knowledge of elemental and isotope composition in the well--‐mixed atmospheres of both planets, and knowledge of gross interior structure to provide context for the compositional information [3,4].
The data set needed to provide this knowledge is being assembled using data from multiple past, present, and future NASA Flagship and New Frontiers missions. The Galileo Probe provided the elemental and isotope composition measurements at Jupiter, except for oxygen. NASA’s Juno mission, part of the New Frontiers Program, is en route to Jupiter to make the interior structure measurements needed there. This objective, together with composition measurements (ammonia, and the water the Galileo Probe missed), comprises a significant part of the Juno mission’s science and the mission budget, and completes the comparison data set for Jupiter. The recently completed Planetary Science Decadal Survey recommends a NASA New Frontiers Program mission, a Saturn atmospheric entry probe mission, to make the elemental and isotope composition measurements needed at Saturn [1]. Interior structure measurements at Saturn, equivalent in science value to that of Juno’s interior structure measurements at Jupiter, would round out the data set. Without these, the comparisons would be inadequate for unambiguous models of planet formation.
It is precisely these Saturn interior structure measurements the Cassini Proximal Orbits would provide. The cost of acquiring the data with Cassini is a relatively small fraction of the Solstice Mission budget. If Cassini does not acquire that data set, the task of acquiring it would fall to a new, future Saturn orbiter mission. Such a future mission is not within NASA’s planning horizon, so it would be decades in the future. This would delay understanding fundamental giant planet and planetary system formation processes in our own solar system, and notably in other planetary systems now coming to light as a result of NASA--‐funded exoplanet search programs.
REFERENCES
[1] Prepublication release of “Vision & Voyages for Planetary Science in the Decade 2013--‐2022,” National Academies Press, Mar. 7, 2011; Available at http://www.nap.edu/catalog.php?record_id=13117 .
[2] Entry Probe Missions to the Giant Planets, D.H. Atkinson, T.R. Spilker, S.K. Atreya, & 53 others; white paper submitted to the NRC 2012 Planetary Science Decadal Survey, available at http://www.archive.org/details/EntryProbeMissionstotheGiantPlanets .
[3] Saturn Exploration Beyond Cassini--‐Huygens, T. Guillot, S. K. Atreya, S. Charnoz, M. Dougherty, & P. Read, in Saturn From Cassini-­Huygens (M. K. Dougherty et al., eds.), Chapter 23, pp 745--‐761, 2009, DOI 10.1007/978--‐1--‐4020--‐9217--‐6_23, Springer Dordrecht, Heidelberg--‐London--‐New York.
[4] Coupled Chemistry and Clouds of the Giant Planets, S.K. Atreya, A.S. Wong, A chapter in The Outer Planets and their Moons (T. Encrenaz, R. Kallenbach, T. C. Owen, C. Sotin, eds.), pp 121--‐136, Springer, Berlin--‐New York--‐Heidelberg, 2005. Also in Space Sci. Rev., 116, Nos. 1--‐2, pp 121--‐136, 2005.