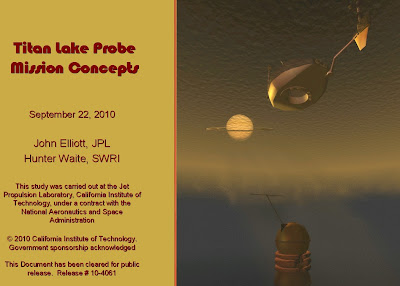 Last October, I was fortunate to receive a preview of the Decadal Survey's Titan lake lander mission concept study.  At that time, I published what proved to be one of the most popular entries in this blog, Titan Lake Probe Mission Concepts.

In this entry, I'll provide some additional background on information provided by the report that wasn't in the conference presentation that the earlier entry was based on.  To recap that earlier summary, the study looked at four variations of Titan lake landers that would approximately fit within the FY15 budget for a New Frontier's class mission.  The study looked at various combinations of probes that would float on a Titan lake surface or would descend to the lake bottom, carry out measurements, and resurface to relay the results.  Two of the options provided long-lived plutonium-based power systems on the floater to allow a long period of study from the lake surface.  Another option had a battery powered floater, and the final option had a battery-powered submersible.  (One Flagship-class option combined a long-lived floater and a battery-powered submersible.)  All options would study the atmosphere during the descent to the lake. 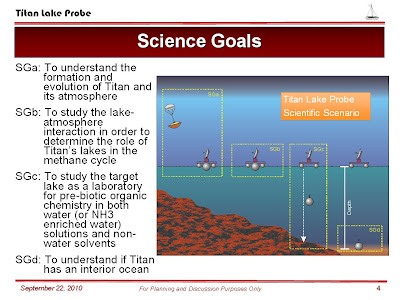 For me, the most interesting new information in the complete mission concept report was the cost estimates for the different options.  The estimates range from $1.3B (FY15 $s) to $1.5B.  (And I'll quote the verbiage on estimates from the report: "Cost estimates described or summarized in this document were generated as part of a preliminary concept study, are model-based, assume a JPL in-house build, and do not constitute a commitment on the part of JPL or Caltech."  In other words, these are preliminary estimates useful for evaluating concepts.  Cost estimates for an actual mission probably would differ.) 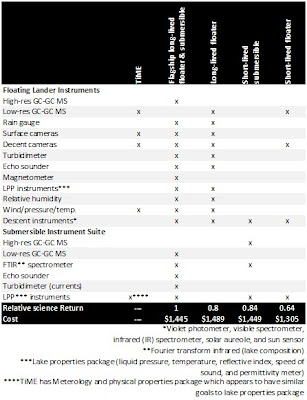 Instrument lists, mission cost estimates, and relative science return from the Planetary Science Decadal Survey JPL Team X Titan Lake Probe Study.  Instrument list for the proposed TiME long-lived lake floater Discovery Mission proposal shown for comparison.  Click on chart for larger version.
I was surprised at the relatively small difference -- ~14% -- in estimated costs between the short-lived floater with just three instruments and long-lived floater with ten instruments.  Or for about the same amount as the long-lived floater, a short-lived submersible could provide slightly greater relative science return.  In the initial studies of the Europa and Titan Flagship missions, costs were initially held to a predetermined figure.  Later, the concept teams were allowed to define the science sweet spot where the cost-benefit curve provided maximum return.  It appears that there may be a similar case for spending another ~15% above the minimum mission to return significantly more science.

The Flagship option is a bit of  ringer in the list of mission concepts.  To be able to provide both a long-lived floater and a very capable submersible, the concept presumes that a Flagship-class orbiter mission bears most of the costs of launch and mission operations.  A stand alone floater/submersible mission presumably would cost significantly more.  However, both the short-live submersible and the long-lived floater as stand alone missions would provide much of the science benefit of the Flagship option within the cost ranges being studied.

For comparison, I included the proposed Discovery-class long-lived floater TiME mission that is competing for launch in the current Discovery selection.  I don't know what the equivalent cost of an FY15 $ Discovery mission is, but in FY10 $s, the PI cost must be kept to $425M, not including launch vehicle and the plutonium ASRG power supply.  I attempted a back-of-the-envelope comparison of the short-lived floater mission concept and the TiME mission.  After accounting for inflation, differences in reserve allowances, and possible launch vehicle differences, I was able to get to within $100-150M of an FY10 Discovery mission.  The TiME mission is being designed to Discovery costs by a very capable team.  Getting to this small of a difference makes me hopeful that the TiME mission can be implemented within a Discovery budget.  If it can, it would implement an in-between option not considered by the concept team: a long-lived floater with a constrained instrument payload.  I believe this would be a dynamite mission, especially at the cost of a Discovery mission.

Sources:
The Titan Lake Probe Concept Study can be downloaded from http://sites.nationalacademies.org/SSB/SSB_059331