White Paper: Argo Mission to Neptune, Triton, and a KBO 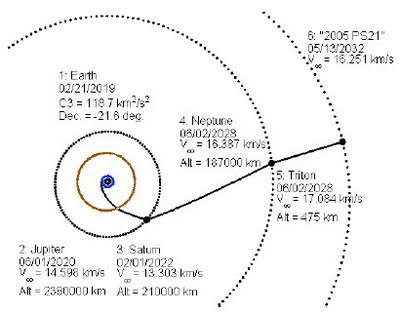 For some months now, a group of planetary scientists have been promoting a mission called Argo that would launch a flyby spacecraft (think of Voyager with 2010s instrumentation or New Horizons with a different set of targets and an expanded instrument suite). The mission would take advantage of an alignment of the outer planets that would allow launch of a craft in 2015 through 2020 that would use gravity assists from Jupiter and Saturn to enable a fly through of the Neptune system in the late 2020s followed by one or more Kuiper Belt Object (KBO) flybys. (The three papers show different mission options with different times

Three white papers have been posted detailing the science that might be done at Neptune, Triton, and the KBO(s). Details on the spacecraft and mission flight opportunities are minimal. The goal of the white papers is to have this mission prioritized high enough to get on the short list of allowed targets for New Frontiers (~$650M) missions, which are expected to be selected twice each decade. Currently, NASA expects to select a New Frontiers mission in the mid to late 2010s that might allow Argo to take advantage of this planetary line up. Unlike New Horizon which will have a limited selection of KBO's to visit following its Pluto flyby, Argo can use Neptune's gravity field to deflect the craft to a large space to enable selection of a potentially large set of KBOs. (Mentioned in passing, however, is the limitation that enabling a close flyby of Triton would limit the potential retargetting opportunities for KBOs. Mission designers would have some flexibility -- Triton can be encountered in different locations in its orbit -- but ultimately there is likely to be a trade off.) 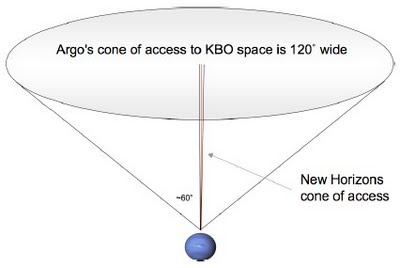 An aggressive instrument list is published in the three white papers. The instruments cover the capabilities of the New Horizon's Pluto spacecraft and add color imaging for the high resolution instrument, a thermal imager, and a magnetometer. 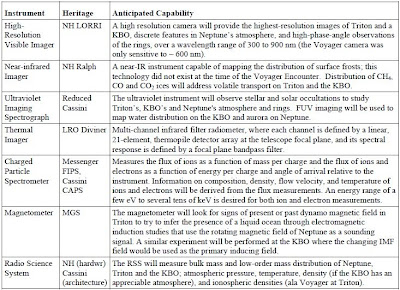 No science goals are listed for the Jupiter and Saturn flybys, although one could expect similar science to what was performed by New Horizon at Jupiter. Ideally, the craft could determine whether or not the Enceladus plumes are still active several years after Cassini's demise.

The following charts are reproduced from the white papers. Each science goal is discussed in more detail in the papers, and I urge you to check them for more information

Neptune Science with Argo - A Voyage through the Outer Solar System

Triton science with Argo - A Voyage through the Outer Solar System

KBO Science with Argo - A Voyage through the Outer Solar System

Email ThisBlogThis!Share to TwitterShare to FacebookShare to Pinterest
Labels: Argo