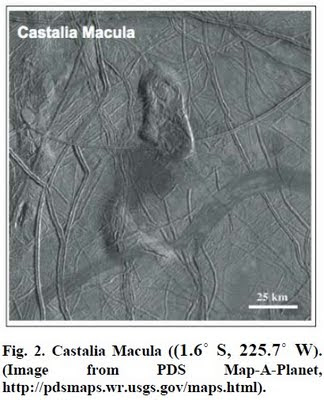 From http://ippw.jpl.nasa.gov/20070607_doc/4_15RAGE.pdf
In a previous post, I suggested that a Galilean satellite observer might be a potential fallback if the Jupiter Europa Orbiter is not funded. Such a mission would extend the goals of the proposed Ganymede Observer by visiting additional moons.

Bruce Moomaw sent me this response which I post with his permission:

You are, of course, correct in pointing out that beggars can't be choosers, and the NASA planetary program looks more beggarly every day. It's entirely possible that we may end up having to settle for "Galileo 2.0", including just a handful of Europa flybys. If we do, however, among the most likely targets would be not just areas of particular interest to the ice-penetrating radar, but regions that may already be regarded as among the more promising locations for a lander and need to be characterized in more detail -- by high-res imaging (to sample fine-scale surface roughness and thus try to put lower-res images in context) and by VNIR spectrometry (to try to identify non-ice materials). Note that the VNIR spectrometer is one of only two instruments on EJSM to have an ability to slew its viewfield from side to side and thus widen its area coverage.

We already have, on the basis of Galileo, what looks very much like a front-runner for desirable Europan landing site -- Castalia Macula, which looks very smooth in some places (important both for safety and as a sign of recent resurfacing) and is very dark and rich in non-ice material (which has not been bleached yet by Jovian radiation): http://adsabs.harvard.edu/abs/2004AGUFM.P31A0962P and http://ippw.jpl.nasa.gov/20070607_doc/4_15RAGE.pdf

Bruce also passed along something he wrote on this topic in 2006:

One of the main organizers of the Europa Focus Group meeting asked the sum total of assembled scientists in the room (and there were a lot) whether anyone thought this kind of intensive study of Europa would be justified if the place didn't have biological significance. Dead silence followed. Europa Orbiter is intended strictly as necessary advance preparation for the next mission, the big Europa Astrobiology Lander that would touch down and analyze the upper layers of the ice (perhaps down as deep as 100 meters or so, if it does its sampling with a short-range cryobot) for evidence of life.

Now, EO officially has two main purposes. One is to nail down once and for all absolute proof that Europa DOES have an ocean. A Jupiter orbiter cannot use a laser altimeter to make adequately sensitive measurements of the degree of tidal flexing of Europa's crust to answer that question -- but the induced magnetic field measurements of Galileo have almost totally nailed it down already. In fact, William McKinnon reported that the latest analyses of Galileo's data have flatly ruled out the slightest possibility that the field it detected was produced by any conductive material that wasn't in a layer very close to the surface. Indeed, the thickness of the layer indicated by the latest analysis of it is so thin -- maybe only 20 km thick -- that even seawater isn't conductive enough to generate the field unless a large amount of sulfates are dissolved in the water (which, of course, is precisely what the near-IR spectra of Europa's ice also indicate). A flyby craft with a magnetometer, making far more flybys of Europa targeted for this purpose than Galileo did, would surely get enough more induced-field measurements to nail this down even more solidly. We'd need repeated simultaneous data from two magnetometers in different places to be able to use it to gauge the thicknesses of the ice layer and the ocean itself, but that data is not in itself necessary to plan the Astrobiology Lander (which I will hereafter call EAL).

The other main purpose of EO is to find good landing sites for EAL. It would obviously be of huge assistance in that -- but if we're really strapped for money, we need to ask whether EO is absolutely necessary to pick out a good first landing site for EAL. Torrance Johnson, at the last astrobiology conference at Ames Research Center, said flatly that he thinks we can pick out a satisfactory first one just from the limited data we've already gotten from Galileo. That seems highly doubtful to me -- but a follow-up Jupiter orbiter with a properly working high-speed data link could do a lot of additional reconnaissance for such sites during its flybys of Europa, quite possibly enough for us to find a pretty satisfactory place even without full-scale coverage of Europa from an EO. It would unquestionably carry a high-resolution camera, a thermal mapper to look for any recent sites of vented water, and a near-IR spectrometer to map the makeup and concentration of materials that had oozed up to the upper ice from the ocean underneath -- and the likely spot for EAL will be one where that concentration is high, and where the lack of surface cratering and regolith suggests that the surface material has been exposed to Jupiter's radiation for only a relatively short time. It could map a lot of Europa just with those instruments.

There seems to be serious question as to whether or not such a flyby craft could get meaningful data from ice-penetrating radar -- even for just a few short strips of Europa's surface. But, again, while IPR is obviously extremely important for general studies of Europa, we have to ask whether it is absolutely necessary to pick out the best landing site for EAL, given the data we'll get from those other instruments. The main relevance of IPR for that particular purpose would be to try to locate pockets or fissures of liquid water very close to the surface -- within just 100 or 200 meters. But it might be possible to at least detect -- and map the horizontal extent of -- pockets of liquid water that close to the surface in a lot of places with a relatively insensitive, shallow ice-penetrating radar of the sort that a flyby craft MIGHT be able to use, even if it didn't measure the actual depth below the surface of such pockets beyond telling us that they were near-surface. And such a less ambitious and sensitive radar instrument used from a flyby craft might also be able to measure both fine-scale surface roughness -- very important data in picking out the EAL landing site -- and also the content of other material (rock dust and salts) in the ice, which could be very important in designing any sampling cryobot carried on EAL.

So, if we're as seriously strapped for cash as we now seem to be, it might -- repeat, might -- be feasible to replace EO with such a cheaper and simpler "Galileo 2" Jupiter orbiter that could survey not only Europa but also Ganymede, Callisto and maybe Io, as all the advance preparation we'd need to then jump straight to the Astrobiology Lander as the next Europa mission.