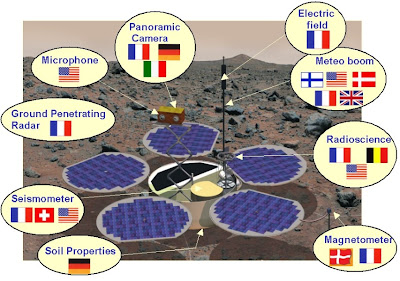 Netlander configuration and instruments
My apologies for the infrequent postings. Not only is there little news of late for future mission planning, I’ve been busy writing proposals and papers. Thanks for continuing to check for new posts.

See this blog entry for background on network missions: http://futureplanets.blogspot.com/2009/05/network-science-missions.html

This is the second part of an occasional series of blogs on planetary network missions. While planetary network missions have been proposed for decades, only one -- the lunar ALSEP stations left by the Apollo astronauts -- has ever been put in place. For a period in the late 1990s and early 2000s, the French CNES agency had an approved Mars network mission on its books. While the Netlander mission was eventually cancelled for budgetary reasons, the plans for that mission provide a comprehensive view of what a future network mission might look like. 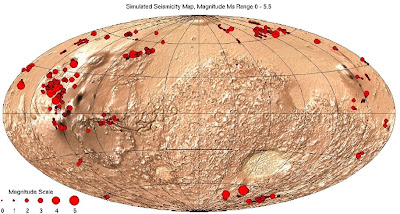 While each of the Netlanders would have been small (more on that later), CNES packed an ambitious list of study goals into the mission. Among the global goals were:


Each lander would also characterize its landing site by:


The mass of each lander had to be kept small so that several could be carried. The design called for an entry and descent (parachutes and airbags) system of 44 kg and a landed station weight of 22 kg. The nine instruments would weigh only 6 kg.

After landing, a series of petals would open (and right the lander if it had landed upside down) exposing solar panels. Power was a major concern. While the designers hoped for 2 Earth years of operation, they were concerned that dust collecting on the solar panels would prematurely end the mission. (This was before the MER rover mission discovered that wind gusts would regularly clean solar panels.) Power available for the lander would be minimal: 50 Wh/sol (compare that with the several hundred Wh/sol for the MER landers).

Solar radiance levels and thermal concerns limited possible landing sites to near equatorial regions, while the parachute descent system limited landing sites to low lying areas. Three of the landers would be placed in a triangle with sides up to 1000 km. The fourth lander would be place at approximately the opposite side of the planet. The distribution of the landers was chosen to maximize the ability to locate the source of seismic events.

In addition to the landers, the carrier craft would enter Mars orbit to serve as a data relay. Each lander would produce about 100 Mb of data per week.

The design reflected a number of factors that any network mission must face. While more stations are always better to both provide greater sampling and redundancy, weight limits likely will keep the number of landers to a minimum. The small size of each lander will keep the area of any solar panels small, limiting power and the sophistication of the instruments and the amount of data they can produce. The data rates produced by the seismometer necessitates a relay orbiter (except for the moon, where stations on the near side can directly communicate with Earth).

In the next installment in this series, I’ll look at a design for a network mission that optimized the network for climate studies.