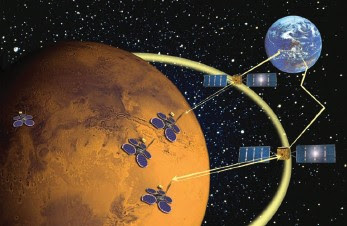 In the past, I've described mission concepts for all the New Frontiers candidate missions except one -- network science. This blog entry will begin a series that looks at plans and concepts for exploring planets with networks of stations.

To date, planetary lander missions have focused on exploring single sites as individual examples of locales. A long standing goal, however, has been to land networks of missions that can address questions that cannot be answered at a single location. In the 1970s, the Apollo Lunar Surface Experiments Package (ALSEP) was placed on the moon by the Apollo astronauts. The stations monitored seismic activity, heat flow, and the lunar environment until they were turned off in 1977, largely for budgetary reasons.

Since then, there have been many proposals for network missions, particularly for Mars. In fact, the number of concepts proposed may rival the number of Mars sample return missions proposed. I am less cynical about the chances of a network mission flying in my lifetime, though. The costs and technology issues for a network science mission are several times less than for a sample return mission.

In 2008, a panel of scientists recommended that NASA add network science missions to the list of candidate missions for New Frontiers competitions (which NASA did). The panel examined the rational and goals for network missions, and I'll quote from that report.

"Network Science missions to study the interiors of Mercury, Venus, and the Moon, with geophysics measurements as a primary objective, would address fundamental science questions. Although remote measurements of a planet’s gravitational field, magnetic field, and rotational state provide information on its internal structure, only seismologic observations can definitively determine the nature of a planet’s interior, including the size and physical state of its metallic core, the thickness of the crust, spatial variations in crustal thickness, and the occurrence and locations of subsolidus phase changes and regions of partial melting in the crust and mantle. The required seismic data can be obtained only with a globally distributed seismic network. The interiors of Mercury, Venus, Mars, and the Moon are poorly characterized, and geophysical network missions to these bodies are needed to learn what is inside them. A geophysical network can also be supplemented to measure planetary heat flow, magnetic field, atmospheric properties and winds, climate variations, surface-atmosphere interactions, and surface mechanical and thermal properties... Without the geophysical data from a network mission, the “foundation question” put forth by the Inner Planets Panel of the [early 1980s] decadal survey, i.e., How do the compositions, internal makeup, and geologic history of the planets explain the formation and sustainment of habitable planetary environments? cannot be answered."

"The scientific objectives of a Network Science mission should be drawn from a subset of the objectives (not in priority order) described in the decadal survey, as follows:

"For the Surface/Atmosphere
"The committee recommends that a Network Science mission be included in the forthcoming NASA New Frontiers announcement of opportunity. The decadal survey identified a network science mission’s primary objective as geophysics. For Mars, atmospheric measurements near the surface are a valuable supplement to the geophysics measurements but cannot be a substitute for them.

"In light of the decadal survey’s recognition of the importance of network science on all the terrestrial planets and the Moon, the committee recommends that network science missions to the Moon, Venus, and Mercury also be considered as candidate missions for the New Frontiers announcement of opportunity in addition to a Mars mission."