Corrections: Since original post, I've learned that there currently is no plan to include a descent imager to record the landing as was done for the Curiosity rover. I also accidentally used an image showing the cameras on the Mars Exploration Rovers Spirit and Opportunity instead of Curiosity, and this has now been corrected.

The second in a series of meetings to select the landing site for the Mars 2020 rover is in progress.  At these meetings, the project's engineers describe the engineering capabilities and constraints on the mission and scientists describe their favorite sites for the rover to explore.  Final selection of the landing site is several year away, but these meetings are good ways to catch up on the current plan for the mission.  You can find all the presentations for this meeting here.


The Mars 2020 rover will be the sixth rover on Mars following the tiny Sojouner rover in 1997, the Spirit and Opportunity rovers (the latter still going strong), the Curiosity rover now at Mars, and the European-Russian Mars 2018 ExoMars rover.  Each succeeding rover becomes more progressively focused on exploring the past and present habitability of the Red Planet.

The Mars 2020 rover will carry a new generation of instruments to explore Mars.  I covered these in some depth when the instrument selection was announced last year (see here).


A single slide provides an update on the mission's development.  The top half of the slide provides details that essentially mean that the engineering is progressing smoothly and advancing from one stage to the next.  The news begins with the rover systems/project update.

The Curiosity rover carried on the bottom of the rover body to look down and shoot a movie of the descent and landing (for a refresher on that movie, see here).  Currently, there is no plan to have a similar camera for the 2020 rover (but see below).


In addition to the two stereo zoom science cameras (the Mastcan-Z cameras), the 2020 rover will carry a number of engineering cameras used to plan rover traverses and to look for hazards.  On the Curiosity rover, these cameras take black and white images.  On the Mars 2020 rover these cameras will take color images and have improved resolution.

The final instrument news is that the ground penetrating radar unit, RIMFAX, is now formally a part of the instrument compliment follow an engineering assessment on whether it could be accommodated within the rover.

The last remaining major engineering design question that I'm aware of is whether or not the 2020 rover's descent system will include a Terrain Relative Navigation (TRN) system.  If included, it would use descent images to calculate the rover's position relative to a map stored on board to allow the descent stage to steer the rover to a safe landing spot.  Many of the most interesting scientific sites have just a few, relatively small safe spots within landscapes of more challenging terrain.  Including this capability would open more sites to the mission for consideration.  The project has yet to decide on whether it will include this capability.  If the TRN system is added, then there will be a camera to image the descent.  I haven't heard whether these would be still images or movies or whether they would be saved for later analysis and release to the public.

One of the primary goals for the 2020 rover will be to cache samples for a future mission to collect and place inside an ascent stage (essentially a small rocket) that would carry the samples to Mars orbit for collection by another spacecraft that would return them to Earth.  A slide shows three concepts for these follow on rovers and landers.  Two would carry the ascent stage in a tube on a large rover.  A third concept would have the ascent stage on a stationary lander and use a small fetch rover to collect and return the cached samples.  This follow on mission is not yet approved or funded, and may follow the 2020 rover by a number of years if it is flown. 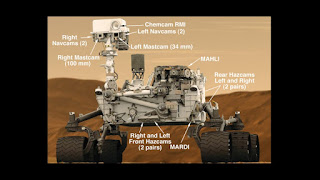