NASA Budget: Will there be money for the mortgage payments?

Correction: Casey Drier at the Planetary Society and a reader point out that my previous version of this post was in error regarding the Planetary Science Research and Analysis budget.  All of the President's requested $130M will be funded in this new final budget.  My confusion came from the final budget document not listing the all spending categories within the Planetary Science Research budget (of which the Research and Analysis budget is one part).  There will also be no sequestration this year to reduce the funding approved by Congress.  [I always welcome corrections from readers; if you see an error, please let me know.]

The two political parties in Congress have agreed on a budget for the US federal government for Fiscal Year 2014.  While the President’s request for NASA’s Planetary Science budget was $1.218B, Congress has settled on $1.345B, an increase of $127.5M.  However, there appears to be some significant downsides to the budget (at least from the initial information).

The winners in the final budget will be the accounts to fund future missions as shown by the chart below.  The key budget increases are to pay for the 2020 Mars rover (~$55M increase), accelerate the start of the next Discovery mission (NASA's smallest category of planetary missions), and $80M for continued detailed studies of a Europa mission. 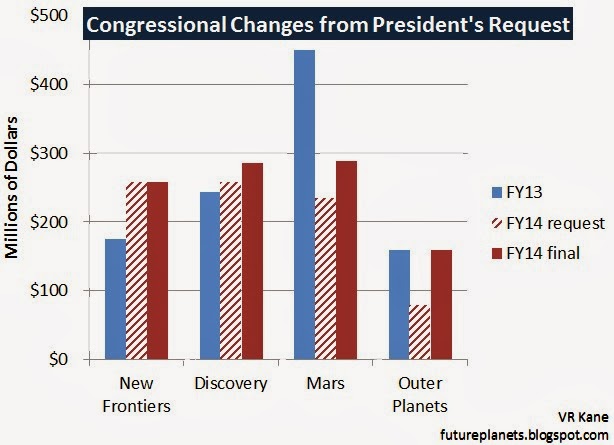 Changes in budgets that pay for future planetary mission development from Fiscal Year 2013, the President's FY14 budget request, and the final Congressional budget.

What’s not clear is where the funds to develop the next Discovery mission ($425M to $500M) and Europa mission will come from.  NASA could trade its planned next New Frontiers mission (~$1B) for the Discovery mission.  Beyond that, NASA’s expected planetary budgets are already committed to pay for approved missions: the Mars InSight geophysical station (Discovery program mission), the asteroid OSIRIS-Rex sample return (New Frontiers program mission), and the Mars 2020 rover.  Developing a Europa mission would require several additional hundreds of millions of dollars a year.  If increasing the planetary budget in future years is Congress’ intent, then this would be welcome news.   Otherwise, Congress is making down payments for missions that NASA would not have the budget to pay for (those mortgage payments referred to in the title of this post). 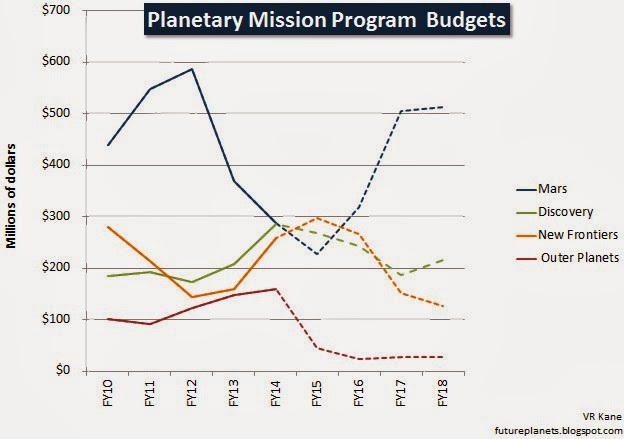 Editorial thoughts: The best way to reduce risk for a future planetary mission is to spend substantial funds up front to define the mission, do preliminary design, and develop critical technologies.  Together with funds from last year’s budget, the Europa Clipper mission will have had ~$160M in definition money before the mission is approved for development.  This should substantially reduce the risk to the mission exceeding its expected development costs of ~$2B.  However, $80M a year isn’t enough to carry the mission through development and to launch.  Several hundred million more dollars would need to be added to the budget to do this.

“NASA shall use the funds provided for the Discovery program to support extended operations for the Messenger program and to increase the tempo by which Announcements of Opportunity (AOs) are released and missions are selected from those AOs. NASA is encouraged to initiate a new Discovery AO no later than May I, 2014 with final phase two selection and award of one or more missions by September, 2015.”