Discovery Missions for an Icy Moon with Active Plumes

I wrote a post on possible low cost missions to Enceladus and Titan a few weeks ago. Then NASA announced that it was cancelling the ASRG power systems that the two mission concepts described depended upon.  There no longer seemed a reason to give an update on missions designed to explore the active plumes of the icy moon Enceladus at Saturn.

Today, of course, we have the news that plumes have been observed at another icy moon, Jupiter’s Europa.  All of a sudden, missions for to explore moons with icy plumes are very relevant. 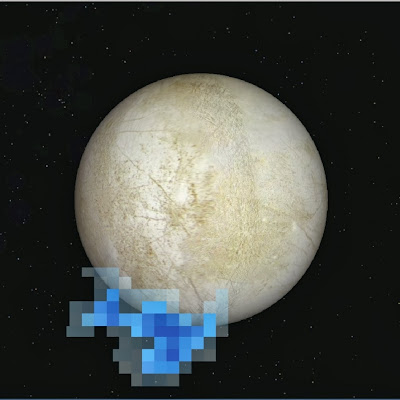 If follow up observations show the plumes of Europa to be persistent, then I would be shocked if no one proposed a Discovery-class ($425-500M) to explore those plumes up close.  To play armchair mission architect (and remember that I am a rank amateur), one could imagine a small spacecraft with cameras or a UV spectrometer to observe and characterize the plumes from afar (say from the relatively low radiation environment near Ganymede’s orbit).  Then the spacecraft might dip down one or more times to Europa’s orbit to fly through the plumes and sample its composition with a mass spectrometer.  During the flybys, a thermal imager or a mapping near infrared spectrometer might study the surface surrounding the sources of the vents as well as map other regions of Europa.  (However, the $2.1B proposed Europa Clipper with its many instruments and radiation hardening for many flybys would be far better if budgets allow.)  Or a mission might capture ice particles and return them to Earth.  As a bonus, spacecraft studying Europa could be solar powered, preserving our supply of Plutonium-238 for other missions.

I’m not a mission architect, but the mission concepts described below that have been planned by experts to explore Titan and Enceladus suggest what a highly focused mission might do for an icy world with plumes.  And I’ve just learned from a presentation made at the Venus Analysis Group last month meeting that NASA appears to be considering making MMRTG Pu-238 power systems available for the next Discovery mission.  That likely would be an enabling decision for the concepts described below for the moons of Saturn where solar power would be an iffy proposition for a tightly cost constrained mission.

My original write up of the proposed Discovery-class missions to Enceladus and Titan follows.

Over the years of following planetary mission proposals, I’ve come to be especially intrigued by a few of them.  Last summer at the Low Cost Planetary Mission conference, new details were presented on two of my favorites, which would explore Titan and Enceladus.

Discovery missions are NASA’s smallest planetary missions that in the past have been capped at a cost of around $425-500M for the spacecraft, instruments, and operations (launch costs are counted separately).  So far, no Discovery missions have traveled past the asteroid belt (where the Discovery Dawn mission is operating).  Fitting a mission to the outer planets into the Discovery budget has proved challenging.  To operate far from the sun, these missions usually require plutonium-based power supplies rather than solar panels.  NASA has offered to pick up a substantial portion of the costs of adding these power systems to a Discovery spacecraft.  However, proposers have commented that there are still substantial ancillary costs to their use that effectively imposes a penalty to missions that require them.  In addition, flights to the outer planets take longer to reach their destination, and each year of additional flight costs $7M to $10M from a budget that is already tight.

These challenges haven’t kept scientists from proposing exciting outer planet missions (see these posts on a Uranus concept and an Io Concept).  The scientific community also has proposed changes to the way NASA structures the Discovery program, including raising the overall cost cap to $500M and adjusting the budget for the length of the time needed to reach a destination.  If these proposals are adopted, then Discovery missions to Enceladus and Titan would be easier to do.

Of the two proposals discussed last summer, the proposal to return samples from the plumes of Enceladus is the more audacious.  The mission would build upon the sample collection methods used by the highly successful Stardust mission that returned dust collected during a high speed flyby of a comet.  (Several of the mission’s proposers were members of the Stardust team.)  Like Stardust, the Enceladus mission would use an ultra-low density material called aerogel to capture dust particles embedded within the ice particles spewed into space by Enceladus.  A second sampling system that would capture the volatile icy materials may also be used.  (A similar concept was dropped from Stardust to minimize costs but will be flown on the Hayabusa-2 asteroid sample return mission.) 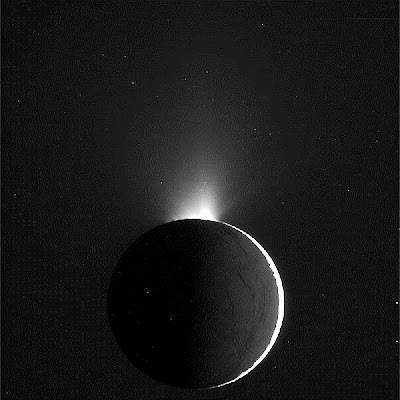 The concept presented at the conference was an evolution of a previous version of this concept that I covered in the past.  The major difference is that the new concept has dropped instruments for imaging the sources of Enceladus’ jets and measuring composition of the jets in-situ.  (Although the design remains compatible with the latter if funding were available.)

Sample return missions like this proposal were considered by the last Decadal Survey, and two key challenges were identified.  The first was to ensure that the Earth could not be contaminated with any life brought back from Enceladus.  The Survey report assumed that an expensive sample containment facility would have to be built.  The current mission concept proposes to address this problem by tuning “the sample impact velocity such that large molecules would survive, but structures such as bacteria or viruses would not.”  However, NASA still could decide that any sample return from a potential life-bearing world requires expensive new facilities.

The second challenge for the sample return mission would be that the mission incurs the costs of flying both to the Saturn system and returning from it, resulting in a 15 year flight (4.5 years of that spent returning to Earth).

My hope is that the proposers can satisfy NASA on these challenges.  As the presentation states, “Determining the presence or absence of life requires multiple analyses that are too complex to fly, and the optimal analytical sequence to follow depends on what you learn at each step of the sequence... Regardless of any biological content of the sample, this would be the first sample from the Outer Solar System and would provide invaluable clues to the origin and evolution of the Solar System.”  Or put another way, the ultimate goal for every class of worlds is to return samples back to Earth where the exquisitely sensitive instruments in laboratories can address the most subtle questions.  This mission proposes to do this in a way that is simple, low cost, and uses the experience of a team that flew a similar mission.

The second mission presented last summer was the Journey to Enceladus and Titan (JET) mission that was the subject of a previous post (that post has considerably more detail on the science goals than this post).  JET would build directly on the discoveries of the Cassini orbiter at Saturn.  While Titan’s surface is perpetually hidden by haze across most of the spectrum, Cassini discovered infrared windows that allow direct imaging of the surface.  Unfortunately the Cassini instrument that can see in those spectra produces low resolution images (~3 km during close flybys).   Cassini also has a radar imager, but its best resolution is in the hundreds of meters.  The result is that our current maps of the surface of Titan have a mixture of resolutions and colors similar to what we had at the end of the 1960s following the Mariner flyby missions. 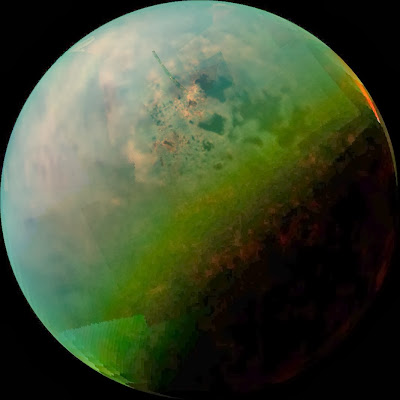 The highest resolution in this composite image of Titan’s northern lakes region taken by Cassini is 3 km.  Credit:  NASA/JPL-Caltech/University of Arizona/University of Idaho

Imaging the sources of Enceladus’ jets also is best done in the infrared where the heat of the material escaping into space makes the vents glow in comparison to the frigid surrounding surface. 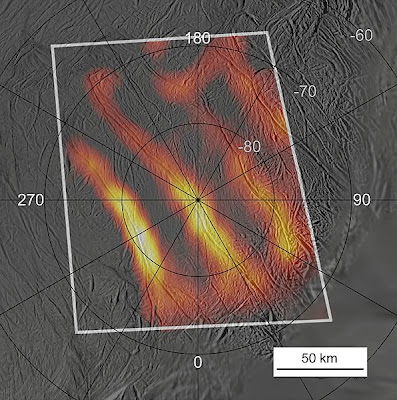 Cassini thermal image showing temperature differences in the areas from which Enceladus’ jets orginate.  The hot spots are shown on top of much higher resolution visible light images.  Credit: NASA/JPL/GSFC/SwRI/SSI

The JET mission would carry a high resolution thermal imager to map the surface of both moons.  At Titan, substantial portions of the moon would be mapped in four thermal bands (“colors”) at resolutions of 25 to 100 m with other areas imaged at coarser resolutions (but still better than Cassini).  Coverage would include high priority areas such as the Huygens probe landing sites, the lakes in the northern polar region, and the hilly and mountainous Xanadu region.  The resolution images of the sources of Enceladus’ plumes will be higher still since the flyby altitudes will up to ten times closer (although the relative speed will also be higher causing smearing). 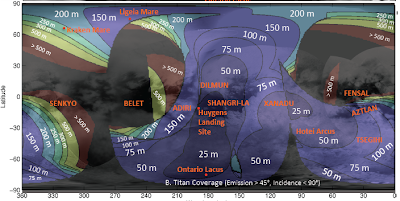 JET’s second instrument, a duplicate of the Rosetta comet mission’s mass spectrometer, also builds on Cassini’s results.  When Cassini was planned, scientists expected that the gasses they could sample at the top of Titan’s atmosphere would be simple as would be the dispersed ice particles between the moons.  Now we know that the top-of-atmosphere chemistry is more complex and that Enceladus is spewing gases and ice particles containing complex salts and possibly complex organic compounds into space.  JET’s mass spectrometer would be able to measure the composition of material with ten times the atomic mass of Cassini’s instrument, with 100 times better resolution of compounds, and a thousand times the sensitivity.

As presented at the conference, the JET proposal hasn’t changed since it was first discussed publicly several years ago.  However, new information on the coverage possible at Titan and the design of the spacecraft were included.

My understanding is that both these concepts will be proposed for the next Discovery competition (date uncertain, depending on future NASA funding).  Like the Uranus Discovery concept I previously wrote about, these are examples of the tightly focused outer planet missions scientists and engineers think could be flown in this program.  The keys to fitting under the cost caps are minimal operations during the long flights to their destinations (spacecraft hibernation), small instrument compliments (one each for the Enceladus sample return and Uranus flyby, two for JET), and simple mission operations once at their target worlds.  If these measures are sufficient, then we may see the outer solar system opened up to a new class of missions.

You can read the original presentations by clicking on these links:


JET: Journey to Enceladus and Titan

My thanks to Steve Matousek of JPL for reviewing the description of the Titan and Enceladus mission concepts and providing corrections.