NASA’s OSIRIS- REx asteroid mission may get much more exciting thanks to an innovative proposal from a group led by Steve Chesley at the Jet Propulsion Laboratory.  The main goal of the OSIRIS-REx mission will be to gather and return to Earth up to two kilograms of material from the surface of the primitive asteroid Bennu (previously known as 1999 RQ36).  Prior to collecting the sample, the spacecraft will also carry out extensive imaging and spectral analysis of the surface and by mapping the gravity field investigate the interior structure.  (See here and here for my posts on the OSIRIS-REx mission.) 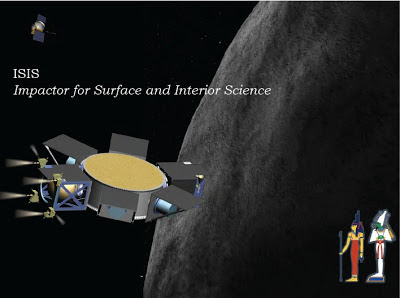 Chesley proposes to send a second spacecraft, named ISIS, to Bennu that would perform a high speed crash on the surface.  You may remember that the Deep Impact spacecraft similarly delivered an impact projectile to comet Tempel  1.  That mission was partially skunked when the dust cloud raised by the collision prevented the main spacecraft from imaging the resulting crater, whose size and shape would have provided important clues about the structure of comets.  (A second spacecraft later imaged the crater.)

Under Chesley’s plan, the impact would occur while the OSIRIS-REx spacecraft lingers (at a safe distance) near Bennu following its initial study and the collection of the samples.  At the time of the impact, the OSIRIS-REx cameras would watch the cloud of ejected material for clues to the composition and size of the blocks of material making up the surface.  Once the ejecta had safely dissipated, OSIRIS-REx would move in for a close look at the ISIS impact crater to examine the composition of Bennu a few meters below the surface.  The spacecraft would also remap the asteroid surface to see what changes occurred as the result of the seismic shock created by the impact, which will help us understand the role impacts have in shaping the surface of small bodies.  (There is no plan to risk the OSIRIS-REx spacecraft by having it sample within the newly created crater.) 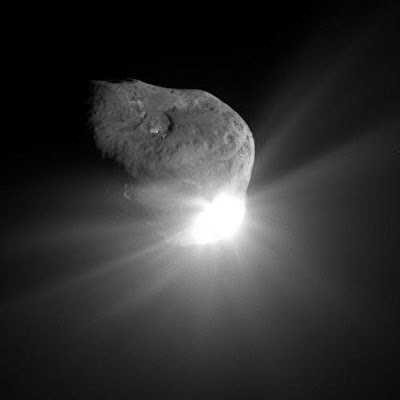 While the impact would further our scientific exploration of asteroids, the ISIS mission also would contribute to other goals.  If astronomers discover an asteroid on a collision course with Earth, one idea would be to send an spacecraft to change the asteroid’s trajectory through a high speed impact.  Small asteroids like Bennu are believed to be rubble piles, and it’s difficult to model how an impact would affect an asteroid’s trajectory.  The OSIRIS-REx mission team would measure Bennu’s trajectory before and after the impact to determine the resulting miniscule change in Bennu’s orbit about the sun.  This would help us better understand whether future impactors could divert asteroids from collision courses with the Earth.  (Bennu is among the known asteroids with the largest (but still small) probability of hitting the Earth in the future.)

NASA also has goals to send humans to explore small near Earth asteroids like Bennu.  Before astronauts arrive, the space agency would like to better understand these bodies’ surface mechanical properties, their local and global stability, and the environment of small particles likely to surround them.  The ISIS impact experiment would further our understanding in all three areas.

For those who don’t remember their ancient Egyptian mythology, Osiris was a god ruler of Egypt.  Following his murder and dismemberment, his wife and queen Isis gathered together his scattered body parts and resurrected him.  While there’s no murder in this story, the proposed ISIS mission would be enabled by taking advantage of various existing components.

First, the OSIRIS-REx spacecraft will be at Bennu and will have several months available in its schedule to watch the impact and study the aftermath.  The 2016 InSight Mars mission provides an option to launch ISIS at negligible additional cost on an orbit would take it twice past Mars and then to Bennu.  The ISIS spacecraft itself would be built around an adapter ring designed to mate a main spacecraft to its launch vehicle and also provide attach points for small secondary spacecraft.  The components needed to turn the adapter ring into a spacecraft – electronics, solar panels, propulsion, and a camera that would be used to track Bennu – would take the place of the secondary spacecraft.    The final collision would be enabled by a JPL-developed AutoNav system, has been used for five previous NASA comet encounters, that would image Bennu in the final hours and steer the spacecraft to an impact. 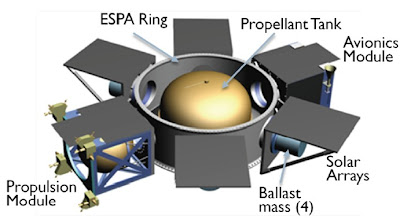 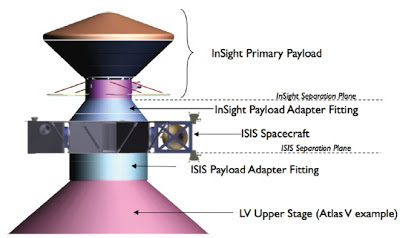 The goal of the mission would be to maximize the wallop of the impact by maximizing the impact velocity and the mass of the spacecraft.  The maximum velocity of the collision would be determined by the constraints of terminal approaches in which the AutoNav system can ensure an impact.  The design team has approximately 1000 kg of spare launch mass on the InSight mission to use in designing the ISIS spacecraft, with a good portion of that needed for propellant for the trajectory maneuvers.  The current nominal mission design would impact Bennu at 13.4 kilometers a second (48,000 kilometers or 30,000 miles per hour) with a dry spacecraft mass of around 420 kg.  Chesley’s team estimates the energy of the impact would be equivalent to approximately nine tons of TNT, enough to create a crater tens of meters across.

The ISIS mission would be a planetary exploration bargain.  While Chesley’s team is continuing to refine the mission design, current cost estimates are somewhat above $100M.  NASA’s cheapest class of planetary missions from its Discovery program cost approximately $450M not including the launch vehicle.  Time, though, is short to develop a spacecraft in time for launch in 2016, and NASA’s budgets are tight.  At the moment, NASA is funding further design pending a decision on whether it can fund the ISIS mission this coming fall.

If the ISIS mission gets its go ahead, the timeline would play out as follows:

I’m impressed the cleverness behind the acronyms for the missions involved.  The OSIRIS-REx team began the Egyptian theme with a mission acronym that spells the name of an Egyptian diety: Origins Spectral Interpretation Resource Identification Security Regolith EXplorer.  The asteroid’s new name, Bennu, comes from an Egyptian god usually depicted as a heron, which OSIRIS-REx will resemble as it extends its sampling probe to the asteroid’s surface.  That resemblance was noticed by nine-year-old Michael Puzio, who won a contest to name the asteroid. Chesley proposes to continue the Egyptian them with ISIS:  Impactor for Surface and Interior Science.  I think a safe prediction is that the features identified on Bennu will also follow an Egyptian theme.

You can read a presentation by Chesley on the ISIS mission here.  Leonard David at Space.com also wrote an article about this mission.