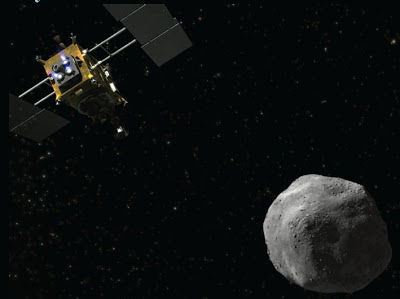 Hayabusa 2 approaching asteroid 999 JU3.  All illustrations from this presentation.

The last twenty years have been good for asteroid exploration – eight asteroid flybys (nine if you count tiny Dactyl which is a moon of the asteroid Ida) and three extended rendezvous.  (For a visual tour of the asteroids visited, I recommend Emily Lakdawalla’sposter.)  One of those rendezvous by the Japanese Haybusa (Peregrine Falcon in Japanese) returned the first ever samples from an asteroid by a spacecraft.  (Many samples have come as meteorites.)   The next fifteen years promises to be even better with at least three additional rendezvous (Ceres - Dawn, 199 RQ 36 – OSIRIS-REx, and 1999 JU3 – Hayabusa 2) with samples to be returned from the latter two.  Two additional sample return missions have been proposed for the 2020s – Hayabusa 3 and the European Space Agency’s Marco Polo-R.

The number of sample missions will allow scientists to return samples from a breadth of asteroid types.  Astronomers have recognized that asteroids have compositions that correlate with the distance of main belt asteroids from the sun.  Closer in, stony S-type asteroids (silicate-rich) predominate, while further out more volatile-rich C-type (carbon-rich) asteroids predominate.  At the outer edges of the asteroid belt and extending into the Trojan asteroids that share Jupiter’s orbit are types such as B and D believed to be especially rich in volatiles.  Researchers theorize that the heat of the early sun boiled off volatiles from what would become the stony asteroid types, while cooler temperatures further out allowed asteroids to form with their volatiles.  (See this Wikipedia page for a summary of asteroid types.  To help ensure confusion for the novice, the main asteroid types have subtypes that are also named with letters (B’s area subtype of C’s, for example), and there doesn’t seem to any order, at least for the uninitiated.)

Our collection of meteorites, which are free asteroid samples, are approximately 75% C type, 15% S type, and most of the remaining are M type (metal-rich) believed to come from cores of what originally were large asteroids.  Unfortunately, the most primitive, volatile-rich meteorites are also the most fragile and hence the rarest in our collections.  They tend to disintegrate in the atmosphere, and if they do reach the Earth’s surface, rain and weather rapidly decompose their fragile volatiles.  It is news when scientists can get to these meteorites within days of their fall (see this Space News article or one of my earlier blog posts).

Researchers would prefer to get asteroid samples directly from the asteroids.  This would not only preserve all materials in the asteroids, it would also allow planetary scientists to place the samples in the context of the overall geology of the parent asteroid.  Fortunately, collisions in the asteroid belt have delivered fragments of different composition asteroids to orbits near Earth where spacecraft can easily sample them.  Hayabusa sampled an S-type asteroid, Hayabusa-2 will sample a C-type, and OSIRIS-Rex will sample a B-type asteroid.  If approved, the Marco Polo-R mission would sample a second C-type and Haybusa-3 would sample a D-type asteroid. (Marco Polo-R’s target asteroid would be a binary asteroid, so it may get samples from two distinct original asteroids.) From the approved missions, we will have samples that should span the composition range of asteroids from the inner asteroid belt to near its outer edge; Hayabusa-3 would extend that range potentially out to the orbit of Jupiter. 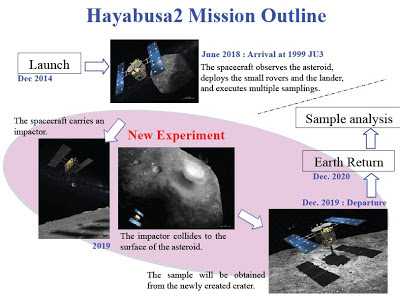 But – to paraphrase an American car commercial – this won’t be your father’s Hayabusa.  The main spacecraft will have a number of improvements including more powerful ion engines, higher communications bandwidth, and four reaction wheels.  (The failure of two of the three reaction wheels on Hayabusa almost ended that mission.) Where the primary goal of the Hayabusa mission was to demonstrate and gain experience with a number of technologies, the primary goal for Hayabusa 2 will be science with a secondary goal of demonstrating additional new technologies.

The mission will also carry two entirely new packages that will significantly enhance its capabilities compared to the original Hayabusa mission.  The first will be a hopping lander supplied by the German space agency, DLR, named the Mobile Asteroid Surface Scout asteroid lander, or Mascot.  This lander will operate on the surface for 16 hours until its batteries run out during which it will hop at least twice to explore new locations.  Mascot will carry four instruments: a wide angle camera, radiometer, magnetometer and infrared microscope.  In addition, the two Japanese Minerva2 lander/hoppers will have solar panels to enable a longer surface life, but will carry only a camera and thermometers for studying the surface.  (The original Hayabusa mission carried a single Minerva lander that failed to reach the surface.)

The most novel addition to the mission, however, will be an impactor designed to create a small crater, exposing fresh material for the spacecraft to sample.  (Material directly on the surface will have been exposed to the sun’s radiation and the environment of space, which may alter its composition.)  The mother spacecraft will release a daughter spacecraft with the impactor.  Once the main craft darts behind the asteroid’s body for protection, an explosive device will hurl a projectile at high speed into the asteroid’s surface.  Fortunately, Hayabusa2 will deploy a second small spacecraft with a camera to witness the explosion and the impact.  (Like many men, there’s still a bit of boy in me that likes to watch things go bang, and I look forward to those images!)

For those of you who followed the original Hayabusa mission (there’s a good summary here), it was a mission full of drama and near miraculous recoveries and an ultimately successful sample return.  The mission demonstrated the technologies needed for more ambitious missions to explore and sample the diversity of asteroids that retain records of the earliest stages of the solar system’s birth. 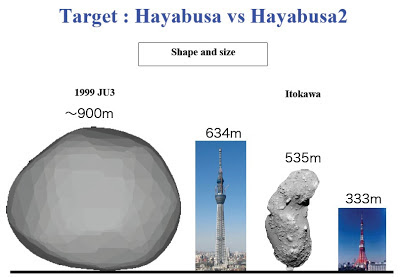