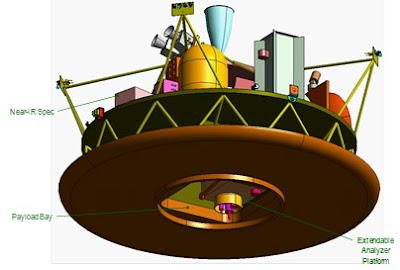 I like to think that I’m reasonably good with a web search, but sometimes I get skunked.  I’ve had several posts on two of the current Discovery mission finalists, the Titan TiME lake probe and the Martian InSight geophysics mission.  I’ve wanted to do a post on the third candidate, the Chopper Comet Hopper proposal.  (I do send emails, but given the competitive nature of these proposals, often get either a polite refusal or no response.)  So, today I’m going with limited information based on a presentation that’s almost three years old (and I don’t have the link anymore, sorry).  Some of what I write today is likely to be out of date.

We’ve now seen several comets up close, and have learned that each has a diverse surface that invites a mission to rove across the surface to investigate each of the landforms.  Comets have too little gravity hold a traditional rover on the surface (a major problem of landing on a comet is staying on it – the Rosetta mission’s Philae lander will use harpoons to anchor itself).  The CHopper  mission would use the low gravity as an advantage.  It would gently settle on the surface multiple times at different locations on the comet.  In between landings, the spacecraft would observe the comet from a distance, mapping the surface and watching the change in activity as the comet approaches perihelion at a distance just outside the Earth’s orbit. 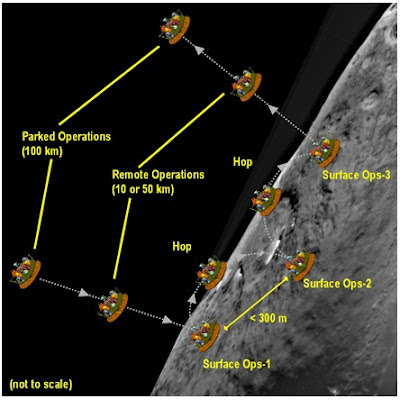 The CHopper mission would combine remote observations of its target comet for almost two years with measurements from several locations on the surface.

The CHopper mission combines the roles of both a comet orbiter and a lander.  Within the Discovery mission budget (~$425M), the instrument list is necessarily limited.  The CHopper spacecraft would carry fewer remote sensing instruments than the Flagship-class European Rosetta comet orbiter and fewer instruments for studying the surface composition than the Philae rover.   However, CHopper would conduct a substantial portion of the science of Rosetta at a second comet and add the unique capability to conduct science at multiple locations on the surface.

The target comet for the mission would be 46P/Wirtanen, a small (1.2 km radius) body with an orbital period of 5.4 years.  This comet was the initial target for the Rosetta mission before it switched to a second comet, 67P/Churyumov–Gerasimenko.  46P/Wirtanen is similar in size to comet 103P/Hartley where NASA’s EPOXI mission (using the Deep Impact spacecraft) observed a heterogeneous surface and jets with different compositions. 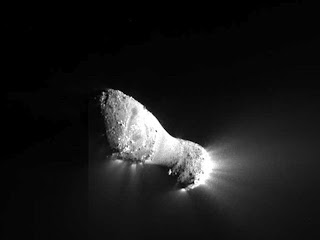 CHopper's target comet, 46P/Wirtanen, is believed to be similar in size to comet 103P/Hartley, which was imaged during a flyby in the EPOXI mission

Mission launch would be in 2015 with the rendezvous with 46P/Wirtanen in 2022.  Approximately 2.5 years of science observations would follow to observe the comet from near aphelion to perihelion.

The CHopper mission would be enabled by NASA new plutonium-based Advianced Stirling Radioisotopic Generators that are ready for their first flight test.  Solar arrays large enough to provide sufficient energy at 46P/Wirtanen would preclude landing on the comet.

Joseph Veverka of Cornell University gave an excellent talk at last Fall’s American Geophysical Union conference on the heterogeneity of the surface for comet Tempel 1.

Editorial Thoughts: I find the concept of CHopper to be exciting, and I’ve been disappointed that the project team has chosen to keep the details close to the chest (but I understand the competitive pressures).   The science promises to be first rate and I think the images from different locations on the surface of an active comet would be spectacular.