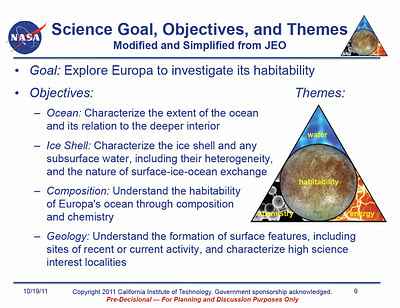 Click on the slide or here to go to the site with the presentation of the Europa mission study team
At this week's meeting of the Outer Planets Analysis Group (OPAG), NASA unveiled new options for exploring Europa as a possible abode of life (and with a third option still to come).  The results are a work in progress, with completion of the studies to come next year.  However, the results so far present entirely new options to finally moving on with the study of Europa.

The new mission proposals come after the sticker shock from the previous proposal, the Jupiter Europa Orbiter (JEO).  When JEO was defined, NASA's budget outlook seemed robust and multi-billion dollar missions possible.  At NASA management's request, its engineers designed a mission that hit the science "sweet spot."  After many months of exploring the Jupiter system, JEO would have carried an extensive suite of instruments into Europa orbit.  In what would have been an engineering tour de force, the spacecraft would have been designed to survive the hellish radiation fields around Europa for a full 90 days (and likely even longer).

Unfortunately, the independent cost estimate for JEO from the Decadal Survey's review pegged JEO's cost at close to $5 billion.  Even for a robust planetary budget, the Survey's members concluded that the price tag was too high and asked NASA to explore cheaper alternatives.

The two mission concepts presented at the OPAG meeting are NASA's response to that request.  To understand how the team arrived at its proposal, it's useful to compare the JEO approach to the Mars exploration strategy.  In the former, a single mission would be flown that would have addressed all high priority goals for Europa exploration except for those that that required a lander.  In comparison, the Mars program has depended on a series of relatively inexpensive missions that each address a subset of questions.  For less than a billion dollars a mission, NASA flew Mars Pathfinder, Mars Odyssey, the Spirit and Opportunity rovers, the Mars Reconnaissance Orbiter, and the Phoenix lander.  Only the soon-to-launch Mars Science Laboratory Curiosity broke the billion dollar mark (and rather substantially).  Looking forward, the Mars program has (or perhaps given the new budget realities, perhaps its more correct to say, 'had') planned to break up the multi-billion dollar Mars sample return into three separate missions to reduced peak funding costs.


Two key factors had driven JEO's costs upward.  First, to meet JEO's goals from Europa orbit, the spacecraft needed to survive for 90 days or more in the harsh radiation field around Europa.  This required extensive shielding and exotic technologies for both the spacecraft electronics and for the instruments.  Second, collecting and returning all the data in just 90 days required high communications rates and as result high power rates.

Comparison of the two proposed spacecraft with the JEO proposed spacecraft
The ocean measurements that had to be done from Europa orbit required relatively small instruments, low to modest data rates, and only 30 days in orbit.  By focusing the orbiter only on those required measurements, the radiation hardening, data rate, and power requirements dropped substantially.

The remaining measurements still required substantial instruments and high data rates.  The team chose to place these instruments on a flyby spacecraft that would orbit Jupiter and encounter Europa 30+ times over the course of the mission.  (The spacecraft also would encounter Ganymede a number of times, but those flybys were planned for gravity assists and were not science drivers for the mission.)  By going to a multi-flyby strategy, the spacecraft spends only a little time each orbit in the highest radiation fields.  There are also days each orbit to return the data, dropping the requirement for peak data rates and power. 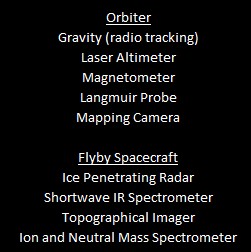 The study team estimates that the orbiter and flyby mission each would cost around $1.5B, not including the costs of the launch vehicles.  The assumption is that for budgetary reasons the missions would not launch together, and their launches might actually be years or many years apart. Assuming that funding can be found, this would place the science community in the difficult predicament of deciding which to fly first, knowing that the second mission might never fly.  Is ocean science more important or is the combination of icy shell, composition, and high resolution mapping science more important? 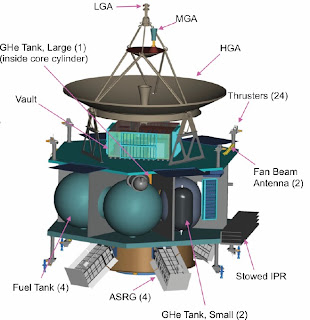 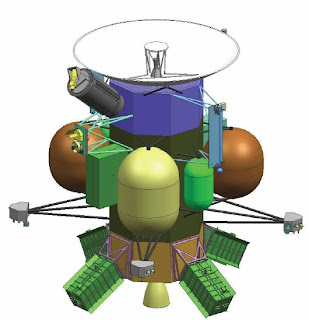 Proposed flyby (top) and orbiter (bottom) spacecraft
Representatives from NASA's headquarters stated their delight in having new, much lower cost mission options to present to Congress for funding.  They are so delighted that they have asked to have the same focused approach applied to a possible Europa lander mission.  Presumably, once the studies for the three possible missions are complete, NASA will ask the science community to prioritize them.  Then NASA will begin the job of securing funding to fly the highest priority mission.  NASA's representatives emphasized that there is no money in the current budget plan to fly any of these missions.  The President's office (OMB) and Congress will have to increase NASA's planetary budget for any Europa mission to begin development.

Editorial Thoughts: It's exciting to have new Europa options on the table in a cost range that I can imagine one of them eventually being funded. However, looked at another way, the studies demonstrate again that exploring Europa is a multi-billion dollar proposition.  Add the cost of the orbiter and flyby with their launch vehicles together, and you are approaching $4B, not too far from the estimated cost of JEO.

Which mission would I chose?  As currently defined, I can't decide.  The eventual goal would be to get a lander on the surface of Europa, which requires picking a location that is safe (high resolution imaging) and has interesting surface chemistry (imaging spectroscopy).  This would argue for the flyby mission as the higher priority.  That mission, however, would image only small portions of the surface at higher resolution than the orbiter mission would.  (The orbiter would produce a 100 m global stereo map in three colors.)  The flyby craft would carry a sophisticated mapping spectrometer (think of a camera that takes images in hundreds of colors) that would be too large and data hungry for the orbiter.  If a simple spectrometer (for those of you familiar with these instruments, a profiling instrument) could be added or if the imager could image in more colors to get at spectral information, I would favor the orbiter.  I certainly have no special insights into these issues, and included this thought experiment only to suggest the tough choices the planetary community will face if funding becomes available.