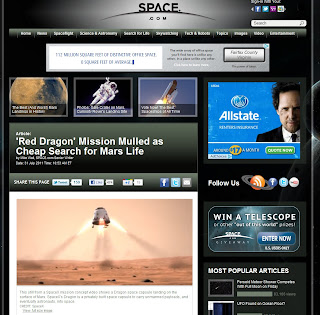 Click on the screen shot to read Space.com's article on Red Dragon
There's an interesting Discovery mission proposal in the works.  It would use a commercial spacecraft in development to land what could be a very large payload on Mars within a price cap of $425M.

The spacecraft would be a derivative of the Dragon manned capsule under development by the Space Explorations Technologies (SpaceX) corporation.  The capsule currently being developed would ferry crews and cargo to and from the International Space Station.  While the current capsule is designed to splash down in the ocean, a future version is planned that would land using rockets.

The founder of SpaceX thinks big, and wants to develop technology that eventually will enable manned landings on Mars.  As a result, the capsule is being developed with eventual use on Mars in mind.
Chris McKay at NASA's Ames research center is working with SpaceX to define a Discovery proposal that would use a version of the Dragon capsule -- nicknamed 'Red Dragon' -- to put a payload on Mars with a launch in 2018.  The goals of the mission would be to drill down a meter or more below the surface in an area known to have ice just below the surface.  (Two possible landing sites: Near the Phoenix lander or near the Viking 2 lander.)  Samples would be brought into the capsule to be analyzed for molecules that would indicate life.

While the proposal in development is modest in its scope, the capsule would be capable of landing several tons of payload, more than all the payloads delivered to Mars to data.

Editorial Thoughts: What to make of this proposal?  SpaceX is a credible company that has successfully developed the Falcon 9 booster and has orbited and returned a prototype Dragon capsule.  It's recently won some big launch contracts, showing that the satellite industry is comfortable with its capabilities.
If the Red Dragon lander were to be developed, it might significantly drive down the cost of landing payloads on Mars since the technology would be based on a production line spacecraft instead of being a unique design.  There's been a lively discussion at the Unmannedspaceflight forum discussing what might or might not be possible.

My take on this is that it's a clever idea, but many things have to happen before it could fly.  SpaceX would have to complete development of its Falcon Heavy booster that would launch the mission.  NASA requires several successful launches before it will commit a science mission to a new booster.  The Dragon capsule would have to be enhanced to land on rockets.  The entire entry, landing, and descent at Mars would have to be thoroughly tested.  SpaceX might treat much of this development as internal R&D and not charge it to an individual Discovery mission.  Even so, I wonder if the first flight can be kept within the Discovery mission cost cap.  NASA would also have to pay for the Falcon Heavy launch in addition to the $425M for the lander and payload; I don't know how this launcher's costs would compare to launch costs for other Discovery proposals. A launch in 2018 given everything that must happen seems ambitious.

While the potential to land large payloads is enticing, larger payloads cost more to develop and test than smaller payloads, and fully utilizing a Red Dragon's capacity could exceed a Discovery mission budget.  And the capsule itself might make it hard to deliver some types of payloads.  For example, could a reasonably large rover be packaged inside and then safely exit the capsule?

There are also questions of whether this is the best choice of landers for the type of mission McKay envisions.  Could the drill and instruments be flown on the proven Phoenix lander instead?  (Note: McKay is a seasoned researcher, so he's undoubtedly already asked himself that question.  Red Dragon may enable a key capability for this mission that the Phoenix lander doesn't within a $425 mission cap.)

Many questions, and for the moment few answers, which would be expected for a new idea and a spacecraft that is still under development.  If these questions can be answered with clever engineering and within tight budget caps, then this would be an exciting development.  I hope we hear more about Red Dragon in the future.

Resources:
Space.com article on Red Dragon
MSNBC interview with SpaceX CEO on his plans for Mars
Wikipedia background on SpaceX and the Dragon capsule