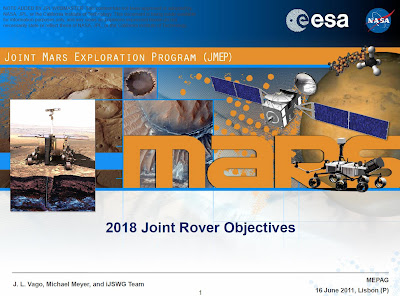 All images are from this presentation at http://mepag.jpl.nasa.gov/meeting/jun-11/31-2018_Objectives_V3_16jun11b.pdf.  Click on any image for a larger view
Last week, I summarized the challenges facing ESA and NASA’s managers as they build the political and budgetary framework for their joint program of Mars exploration.   In the meantime, scientists and engineers from both sides of the Atlantic have been defining the goals and exploring the implementation of the 2018 rover.   Two weeks ago, a number of them met in the first international Mars Exploration Analysis Group (MEPAG) meeting to discuss those plans among other topics.   Only brief mention in the presentation material was made to the budget by noting that, “The 2018 [rover] mission is very cost constrained.”
While it appears that the definition of the science goals is well advanced, the engineering analysis is in the early stages.   As a result, the presentations in the meeting and their summary here are status reports for an on-going process.  Details can and probably will change. 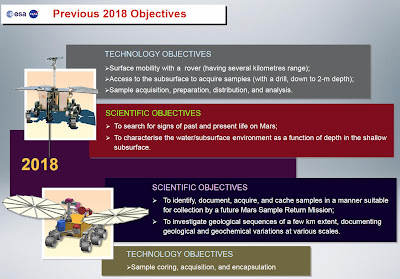 Previous objectives of the separate 2018 rovers
Until a few months ago, the 2018 mission was to be two rovers, delivered by a single lander, that would separately explore the same area.  ESA’s rover would drill beneath the surface, hoping to find pristine samples to analyze with a sophisticated laboratory.  NASA’s rover would examine materials at the surface with a less sophisticated set of instruments on a robotic arm and collect and cache a small number of them for possible return to Earth by future missions.  While there were opportunities for collaborative exploration, each rover had distinct goals.
Budget realities for both space agencies have forced the decision to fly a single rover that will combine the goals of both agencies.  Today, I’ll look at the scientific building blocks – the instruments – available to the combined mission.  In the next post, I’ll discuss how scientists plan to make use of what would be the most sophisticated set of capabilities ever landed on another world.
To understand the challenges faced by the engineering teams, it helps to begin with some background on the types of measurements that can be done by a Mars surface mission:
(For simplicity, I have not included all instruments from each mission in the summary above.) 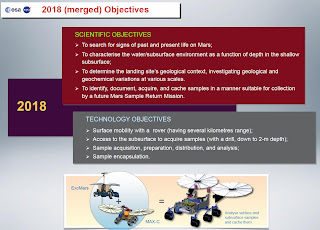 New goals for the single joint rover
The fundamental challenge for merging the rover missions previously planned by each space agency will be to accommodate their different suites of instruments.  Both rover missions would have had remote sensing instruments.  However, NASA’s MAX-C rover would have relied entirely on contact instruments and a surface drill located on an arm for its analysis and collection of surface materials, a strategy driven by that mission’s need to rapidly assess a number of potential materials to select the very few that would be collected for sample return.  ESA’s Exo-Mars rover, on the other hand, would have forgone surface contact instruments to focus on a highly capable analytical laboratory suite.  This mission would also have acquired samples only through a drill that could return material from as deep as two meters below the surface.  (The goal is retrieve more pristine samples that have not been altered by the harsh conditions at and near the surface.)

The new rover retains the ExoMars goal to analyze samples collected
from depths below agents that are likely to destroy organic materials
The current vision for the new single rover would have it retain all the capabilities of NASA and ESA's rovers in a single rover.
The simplest implementation of the joint 2018 rover would keep the MAX-C and ExoMars heritage instruments distinct.  In this option, samples for possible return are analyzed and collected by the rover’s arm and a surface sampling drill.  Samples collected by the ESA deep drill could be analyzed only by ESA’s analytical instruments (and two ‘contact’ instruments that examine material along the bore hole).   A potentially interesting surface sample found  by the arm instruments could not be passed to the analytical instruments for a second opinion.  Similarly, a really interesting sample brought up by the deep drill could not be passed to the arm to add to the sample cache for eventual return to Earth.
The science teams setting the goals for the joint rover recognized these limitations.  Their members have assigned a very high priority to allowing samples collected by the deep drill for inclusion in the return cache.  The ability to pass samples from the arm’s near surface drill to the analytical laboratory for analysis also would be valuable, but would be a lower priority.
Unfortunately, adding these requirements to trade samples between the surface and deep drill elements of the rover requires redesigns.  For example, ESA’s analytical laboratory instruments have been largely designed.  Moving them and the deep drill to a location in the rover where they could interact with the arm and sample cache hardware would require a redesign (degree of difficulty not discussed in the presentations).