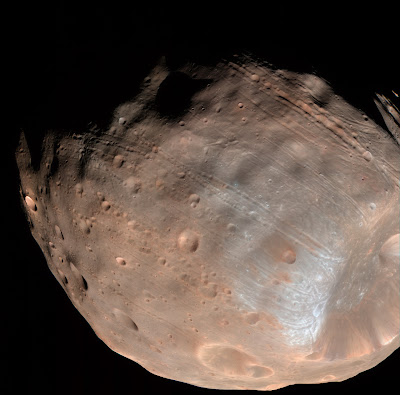 The Martian moon Phobos, which may be a captured asteroid.  This image shows the complexity of the surfaces of small, primitive bodies.  Phobos, with a mean diameter of 11.1 km is many times larger than the OSIRIS-REx target, asteroid 1999 RQ36.  Credit: HiRISE, MRO, LPL (U. Arizona), NASA
"The Near-Earth Asteroid Rendevous (NEAR) mission to 433 Eros demonstrated that even small asteroids are covered with complex and substantial regoliths, which are heterogeneous in texture and detailed in composition.  To understand the geologic evolution of asteroids, regoliths must be studied in detail, and their variability must be characterized both vertically and horizontally... To maximize the science return from such a mission, it is essential to select the most interesting locales on the asteroid, a goal that implies a global reconnaissance of the target body."
-- New Frontiers in the Solar System An Integrated Exploration Strategy [2003 Planetary Decadal Survey]
[An asteroid sample return mission] "should have the following science objectives...":
-- Opening New Frontiers in Space: Choices for the Next New Frontiers Announcement of Opportunity [2008]
The selection of the OSIRIS-REx New Frontiers mission to return a sample from a near-Earth asteroid has been widely reported.  As the quotes that open this post state, simply returning a sample of an asteroid is only part of a robust sample return mission.  It is also important to try to understand the history of the asteroid.  While OSIRIS-REx's target asteroid, 1999 RQ36, is believed to represent a primitive composition that will likely tell us much about conditions in the early, pre-planet solar system, the body has experienced over four billions years' worth of events.  This tiny body, 575 m in diameter, is likely a fragment of a larger asteroid.  Since its separation from its original parent body, this asteroid will have been pounded by numerous collisions and may well be a pile of rubble with materials from various depths of its parent body jumbled together and exposed on the surface.  That material on the surface from which the sample will be taken has been exposed for an unknown period of time to the baking and irradiation of the sun, which may have modified its composition.
All of these factors require that a robust sample return mission also be able to fully characterize the surface and interior of its target asteroid.  Earlier versions of this mission, then called only OSIRIS, focused only on the sample return.  The recently approved version of the mission includes a suite of instruments to remotely study this body: 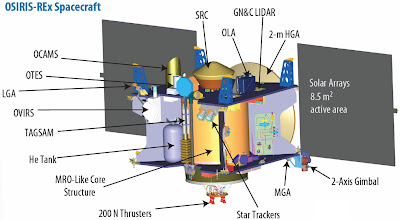 OSIRIS-REx Spacecraft and Instruments
The suite of instruments are synergistic.  The cameras, for example, will document the physical structure of the surface, providing clues to past events.  The OVIRS and OTES instruments will measure different portions of the visible and infrared spectra to understand the composition of the surface minerals.  The REXIS instrument, by contrast, will look at the elemental composition of the surface.  (A simple analogy of the difference between elemental and mineralogical composition: Bread and cake have similar 'elemental' compositions based on flour, water, and sugar, but the combination of those elements result in distinct 'mineralogies'.)  The laser altimeter and radio science together will map the shape of the surface and distribution of mass inside RQ36, which together will provide clues to the interior structure.
The instruments on OSIRIS-REx will have dual purposes.  While they will help us understand the composition and history of this body, they will also help mission planners to plan the sample acquisition.  The cameras and laser altimeter will reveal the physical geography of potential sample sites, while the spectrometers will reveal the composition.  (My guess: Mission controllers will select a site that has the best mixture of materials on the surface to sample the greatest heterogeneity.)

The OSIRIS-REx spacecraft will spend more than a year studying 1999 RQ36.  By the end of this period, it will probably be, square-meter-for-square-meter,  the most intensively studied body in the solar system.
OSIRIS-REx is not the only mission that aims to return a sample of a likely primitive small body.  Russia's Phobos-Grunt mission will leave this year on a round trip to the Martian moon Phobos, which may be a captured asteroid.  (RQ36 is a B-type asteroid, while Phobos is a likely C-type body, which are both believed to represent relatively unaltered samples of the non-volatile early solar system.)  Russia's mission will carry a number instruments to characterize its target moon.  In fact, it's instrument suite is more wide ranging than OSIRIS-REx's, with both remote sensing and surface instruments.
OSIRIS-REx and Phobos-Grunt will be joined this decade by the Hayabusa 2 mission, which will also sample a primitive, C-type asteroid.  It appears that Hayabusa 2 will, like Hayabusa 1, carry a number of remote sensing instruments to characterize its target and plan for the sample acquisition.  The European Space Agency is also considering a primitive asteroid sample return mission, Marco Polo-R, for the 2020s that will likely carry several remote sensing instruments. 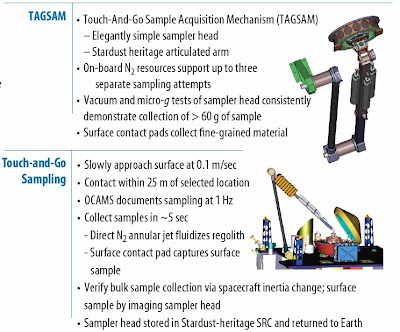 The OSIRIS-REx mission will also carry a sampling mechanism.
Background:
The OSIRIS-REx team has posted a fact sheet on the mission: http://uanews.org/files/osiris-rex/OSIRIS-REx_Factsheet.pdf  All images in this post, except the image of Phobos, are from the fact sheet and are reused with permission. 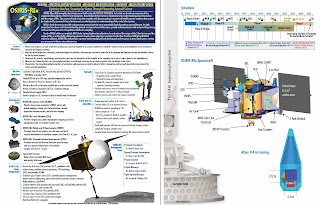