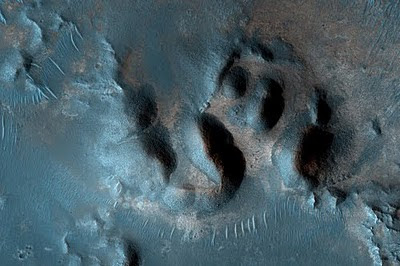 Color Image of Nili Fossae Trough, Candidate MSL Landing Site (PSP_003086_2015)
Credit: NASA/JPL/University of Arizona
Researchers writing in Earth and Space Sciences suggest that the Nili Fossae region of Mars resembles the East Pilbara area of Western Australia, which contains early fossil records of life on Earth.  If their interpretation of possible hydrothermal activity on Mars is correct, this would be a key location to explore for fossils on Mars. At one time, this area was in contention for the Mars Science Laboratory mission until further analysis showed it to be too rough to guarantee a safe landing.  Sciencedaily.com summarizes the research at  while Wikipedia provides background on the Pilbara craton in Western Australia that preserves the only pristine areas of the Earth's crust from 2.6-2.7 billion years ago.  An abstract provides information on the geological setting of Earth's oldest fossils within this region.   [Editorial note:  I was seriously bummed when Nili Fossae had to be dropped as a possible MSL landing site.  From the descriptions of the site, the views of landscape would have been dramatic, much like the views in the American southwest.] 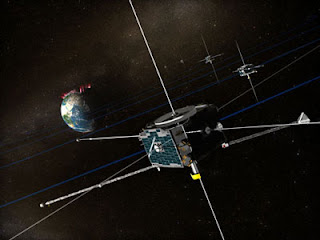 THEMIS spacecraft
Two NASA spacecraft are on their way to orbit the moon to study the solar wind and lunar fields and particles environment moon.  Both spacecraft are members of the five spacecraft THEMIS mission launched in February 2007  that has been studying the Earth's magnetosphere.  The craft will assume station keeping at the Earth-Moon L1 and L2 Lagrangian points in October 2010 followed by entry in lunar orbit in April 2011.  Following their 18 month mission to study the lunar environment, the spacecraft will be commanded to crash into the moon.  Aviation Week and Space Technology has an article on the planned mission.  Miscellaneous

India is continuing its planning for its next lunar mission consisting of an orbiter and Russian lander/rover.  Instruments for the planned 2012 mission will be selected in the next month.  Spacedaily.com has a short article on the instrument selection  and Wikipedia adds a few more details on the mission.  [Editorial note: Instrument selection now for a mission to fly within two years seems like short lead time.]