By far, the most interesting presentation at the last MEPAG meeting was an analysis of options for a 2018 mid-range (between MER and MSL in capabilities and cost) rover (MRR) as a precursor to MSR. It's a long presentation that takes a couple of readings to digest. This will be a summary of key points. I urge you to read the presentation if you are interested in the details of Mars mission planning. (MER = Mars Exploration Rovers Spirit and Opportunity; MSL = Mars Science Laboratory Curiosity; MSR = Mars Sample Return.)

The mission plan wrestles with several key requirements imposed by NASA's larger Mars program goals. First, the mission needs to continue the goal of exploring past or present questions of habitability. Second, it needs to fit within a larger goal of an eventual sample return. Third, it needs fit within a budget of ~$1B plus a bit. And fourth, it must be a precursor to MSR.

From a long list of possible scientific goals, three were selected:

* Explore Noachian (the earliest period of Mars history around 4.6 -3.5B years ago) to determine if life arose on Mars and to explore the environment in which it either did or did not arise
* Explore the transition from the Noachian to Hesperian (3.5-1.8B years ago) to understand how the Martian environment changed
* Explore questions of astrobiology in a new location different than the ones that will be explored by the MSL (slated for a 2011 launch) and the European ExoMars rover (also slated for 2018).

The definition team also added a forward looking programmatic goal: cache samples for a future Mars sample return mission to return sometime in the future (hoped to be in the 2020s). This goal comes with a hefty scientific price tag. The potential weight of the scientific instruments drops from 40+ kg to just 15 kg. The difference would go to equipment to acquire, handle, and store approximately 20 sample cores. (A graphic suggests that 5 samples might be taken from 4 sites along a traverse.)

To fit within the weight limit, the scientific instruments would be largely placed on a robotic arm, much like MER's are. (Like MER, the MRR would have mast mounted cameras and possibly spectrometers but would not have MSL's laser-induced breakdown spectroscopy.) Sophisticated chemical and biological laboratories such as those carried by MSL and ExoMars would not be possible.

Several advanced arm-mounted contact instruments are proposed to enable microscale visual, mineralogical, organic, and elemental imaging. Perhaps the most important of these would be two flavors or Raman spectrometers that can detect the presence of organic material present in parts per billion.

To round out the summary of the mission, it would be solar powered, limited to equatorial regions, and would reuse MSL's precision descent and skycrane landing technologies.

Site selection for this mission would have be done not only to explore ancient potential habitats for life. Because samples will be cached for future retrieval, a whole new set of site selection criteria such as stratigraphy, evidence for ancient atmospheres, and remnant magnetism come into play. 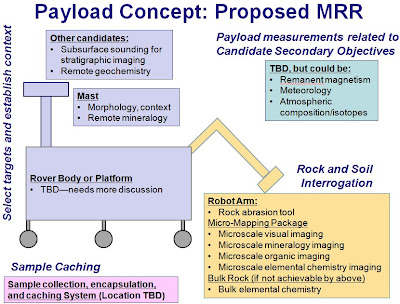 Editorial thoughts: The mission proposed is ambitious. It's targeted for $1B plus a bit. I would not be surprised to see that bit grow by $500M to $1B.

Readers of this blog know that I believe that a sample return mission will fly shortly after the true location of Shangri-La is found. Devoting substantial weight to caching samples forecloses two other potential strategies:

* Flying a sophisticated astrobiology laboratory as will be done for MSL and ExoMars. That laboratory would add to our scientific understanding of Mars. If those samples are never returned, that data that will never be recovered.
* Flying two smaller rovers that also forgo the astrobiology instruments but that carry the sophisticated contact instruments proposed for the MRR. This alternative would give us the opportunity to explore two different sites.

I think that the most important decision to come out of the Decadal Survey in progress is whether or not to bet the Mars and planetary program on a $6B sample return that would largely consume the planetary exploration budgets for approximately a decade. If the decision is that those samples are that important, then the proposed MRR looks reasonable. If Congress and NASA aren't willing to make that bet, then there are other strategies for MRR that could be pursued. This is the first mission where serious trade offs would be made based on whether or not a sample return mission will be flown. This is gut check time.